The Browns defense features a “Bend Don’t Break” philosophy which tightens up in the Red Zone. How will they fair against the mighty Chiefs offense? 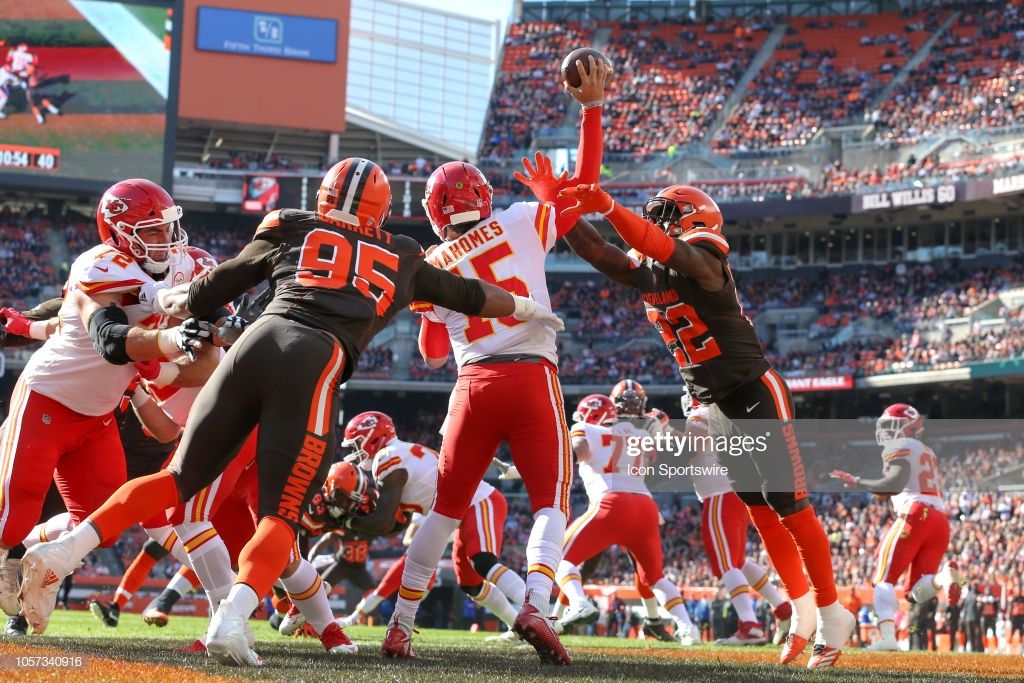 Make no mistake about it – the Chiefs offense is a juggernaut. Browns fans watched JuJu Smith-Schuster, Chase Claypool and Dionta Johnson burn the Browns secondary two weeks in a row. Older Browns fans might be updating prescriptions on heart medication thinking about Patrick Mahomes and his explosive receivers. Another article will focus on coverages that will optimize the Browns secondary against the Chiefs in between the twenties, however this article will focus on the biggest weakness in the Chief’s offense: The Red Zone.

Under Andy Reid, the Chiefs offensive line features some bargain bin finds masked by tremendous skill position talent. Austin Reiter and Cam Erving migrated over to Kansas City from the Browns bench, and broke into the starting lineup on purpose. The previously undrafted Reiter maintained his starting job at center with solid production. He joins former Browns Pro Bowler Mitchell Schwartz and forgettable first overall pick Eric Fisher as the core of the line.

Reid and the front office hoped Lucas Niang would eventually take over at guard or a swing tackle, but has yet to take a pro snap after his college injury.

The rest of the offensive line remains consistent with the value former Chiefs and Browns GM John Dorsey put into the position. Starting Chiefs guards Andrew Wylie and Nick Allegretti are inconsistent, according to Pro Football Focus rankings. Wylie is an undrafted player who developed on the Colts practice squad with a below average PFF grade, and Allegretti is a 2019 7th round selection who has overachieved to a passable 66.2 ranking.

Compounding the talent deficit is the week 11 loss of Mitchell Schwartz to injury. Taking his place, former Giant tackle Mike Remmers has been league average at right tackle, but again not the force Schwartz has become through the past decade at right tackle. This is the player Myles Garrett will likely face with Adrian Clayborn facing Fisher.

The Price The Chiefs Pay

All of these issues and the general lack of investment in the Chiefs offensive line left the group ranked 11th out of 32 NFL offensive lines on the season. With 65 hurries on the quarterback, the Chiefs line is 7th worst in the NFL in giving Mahomes time. Most alarmingly, the Red Zone running game has all but disappeared.

The most clear aspect of a regression in the Chiefs is rushing efficiency in short yardage situations. Since Schwartz left the lineup in week 6, the Chiefs could only manage eleven rushing touchdowns. The rush attack also deteriorated around that time because of the loss of Pro Bowl fullback Anthony Sherman, first from COVID-19 and then a significant decline in offensive snaps. In six of the last 10 games, the Chiefs failed to score a single rushing touchdown.

The problem only compounds as teams figure out this weakness in the running game. Since week 12, the Chiefs running backs scored two red zone rushing touchdowns. The Chiefs signed L’Veon Bell to help mid-season, and he scored on a single 12 yard run in week 15. In a game which featured backups, Darwin Thompson scored on a one yard run in week 17. That is it.

What Does This Mean for the Browns?

This article does not intend to lie to you. The Chiefs are an explosive offense. Experts call this the best team in the NFL this season, and they deserve praise for explosive touchdown-producing potential on every play. This Chiefs team is also getting healthier coming off a bye while most of the NFL is getting more dinged up. The Kansas City run defense has some issues – and that might be a subject explored at another time this week – and the Browns will not be expected to win this game for good reason.

However, the Chiefs have dropped to a mediocre 14th in team Red Zone Touchdown Scoring Percentage this season. Andy Reid typically creates balance between the run and the pass. This season, the balance was gone in the Red Zone, almost exclusively relying on passes to Travis Kelce or quick out patterns to Tyreek Hill.

The Browns sit comfortably in 4th on offense in the Red Zone, and 19th on defense.

No team in the NFL is as dangerous as the Chiefs on offense from the 20 yard line to the other 20 yard line… but the 2020 Chiefs aren’t scoring from close range like they used to in 2019.

The Browns believe in tightening up inside the thirty yard line, and have forced a number of field goals throughout the year after surrendering big plays. The Browns turned the Steelers one dimensional last week, and Mahomes may commit to a similar Wild West shootout this weekend.

Follow all the Real Brown Fans articles coming this week, along with Twitter announcements on @realbrownsfans, @real_BrownsFans, and @Realcavsfans. Go Browns!