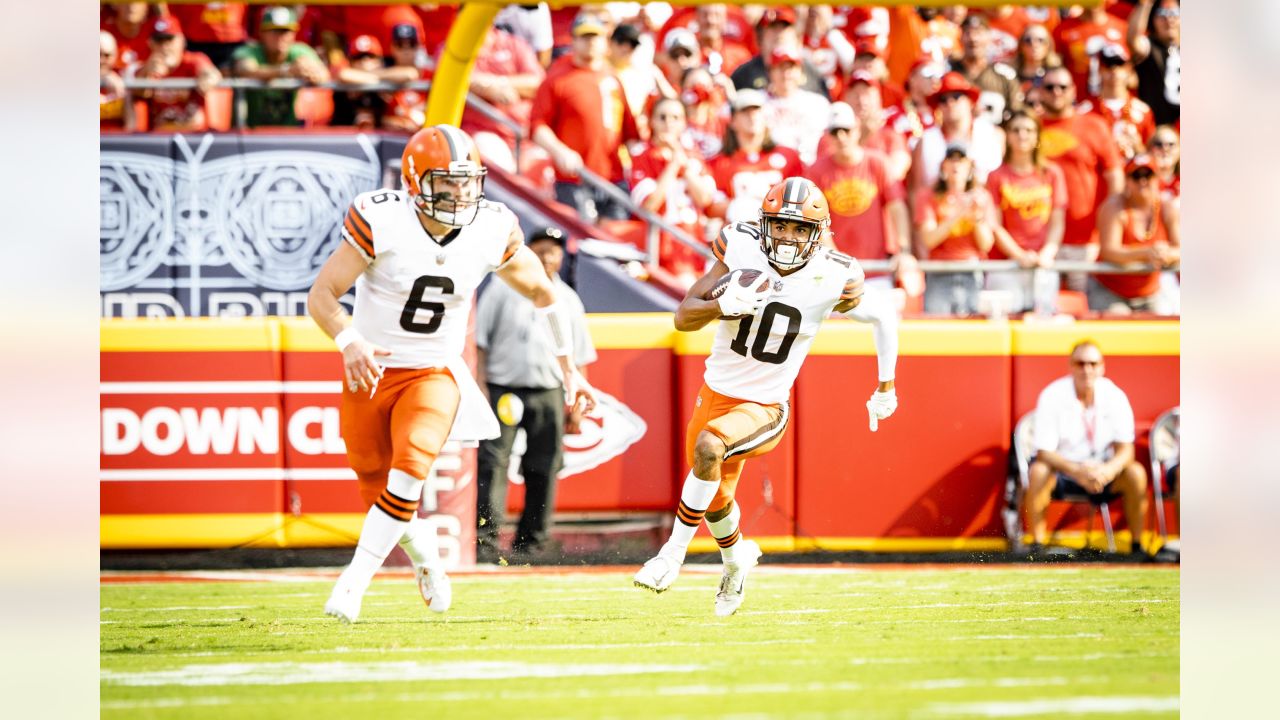 Browns fans had some great questions leading up to the game, here is what we learned from a battle of two of the AFC’s elite in Week One:

1. The Chiefs their off-season completely revamping their Offensive Line, while the Browns replaced three starters along their defensive line, including Pro Bowl DE Jadeveon Clowney. Who will win this battle of the trenches in Week One?

In what could have been the biggest play of the game, Jadeveon Clowney and Myles Garrett met at the QB to get the big third down stop the team had been needing all game.

Garrett tallied three hits on Mahomes, along with four total hurries matched up against new Chiefs LT Orlando Brown, though a handful of those pressures came unblocked on a number of different looks from Browns DC Joe Woods.

Clowney read and downed a reverse for a huge loss, while putting together four pressures of his own. Despite the pressure, Mahomes did an excellent job of avoiding the hits and escaping the pocket to extend plays, while the Browns rush did not seem to knock him off his rhythm enough to get the stops they needed down the stretch.

On the interior, Malik McDowell led the Browns in snaps during his first NFL game, putting together a very impressive performance to lead a unit which held the Chiefs to just 73 yards rushing on 23 attempts.

2. Which Browns player may not start , but will make an impact on this game?

The answer was likely not on anyone’s list of surprise standouts: Wide Receiver Anthony Schwartz

From the first drive, Browns Head Coach Kevin Stefanski got Schwartz’s rare speed involved with the game plan, targeting him on a high efficiency sideline throw early in the first quarter, before handing it to the rookie on a well-executed reverse for a first down a handful of plays later.

The biggest play came later in the quarter, with Schwartz attacking inside the corner before outrunning the safety to the corner for a huge, 44-yard pitch and juggling catch deep into Kansas City territory.

Were it not for a tremendous play by Chiefs Safety Juan Thornhill late in the game, we could be talking about another game-changing play that just slipped out of his grasp which could have flipped the game on its head. Nevertheless, Schwartz played in 53% of the offensive snaps in Week 1, catching three of his five targets and amassing 86 total yards in what turned out to be a very impressive debut.

3. Vegas has the Browns as five point underdogs… are you taking the over or under?

The total closed at 54.5, which these two offenses surpassed with 10 minutes remaining in the game on a 75-yard bomb to Tyreek Hill which completely changed the complexity of the game.

Not sure many bettors took the Under given these offenses, but the Browns move to 11-8 against the Over since the start of the 2020 season.

With a Week One war against the AFC’s elite team in Arrowhead Stadium, the Browns shift their attention to Week 2 and their home opener against the 1-0 Houston Texans.

Head over to the Browns Talk Forum on realbrownsfans.com to join the discussion and post your questions leading up to next week’s game!