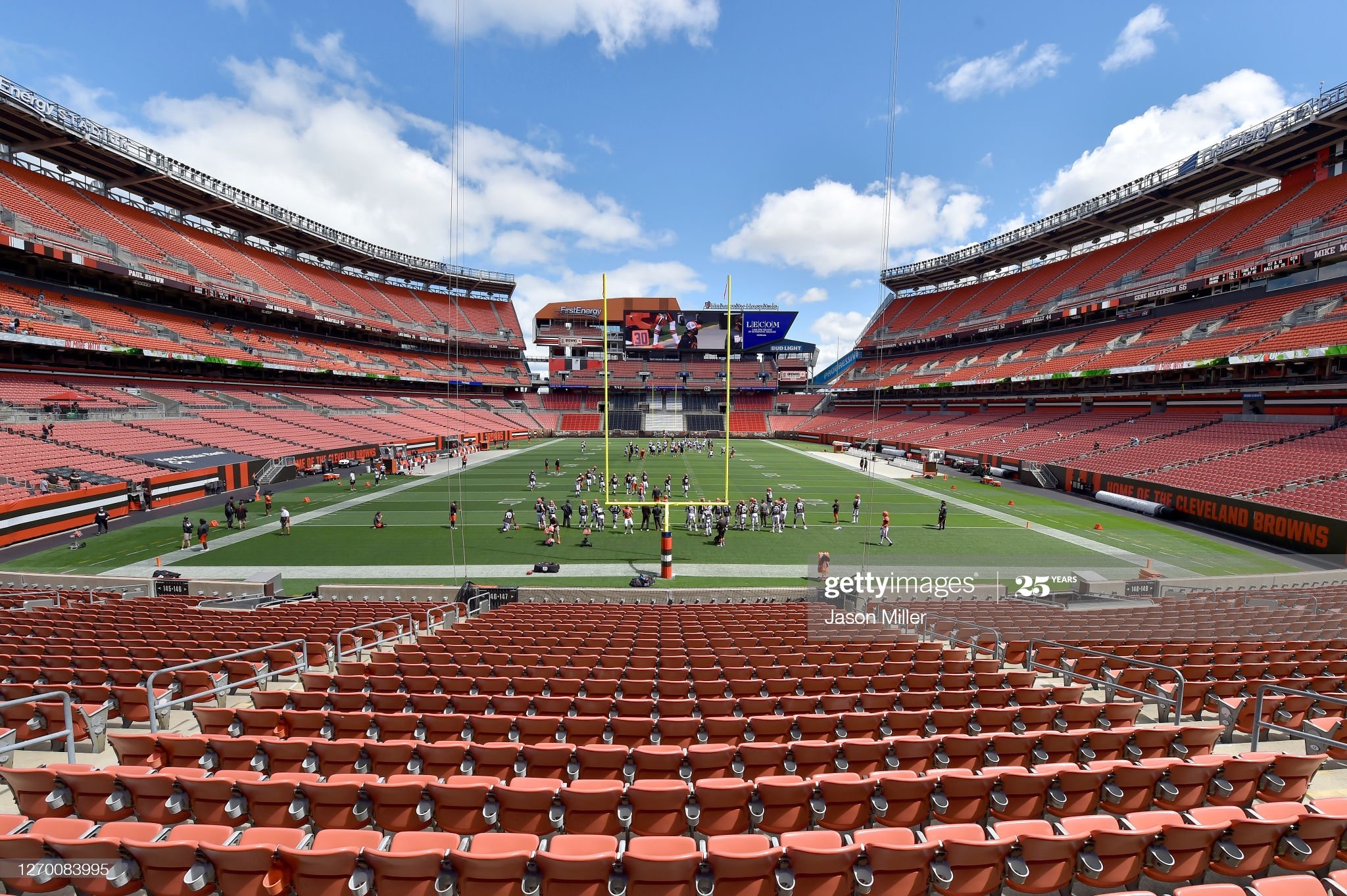 The Cleveland Browns kick off their 2020 season today against the Baltimore Ravens, and so in celebration, we are doing a Roundtable for the 2020 season. A year that has been weird and hard on teams making a lot of changes is now going to start bearing it’s fruit.

Joining us will be writers Chris Richani, Jordan Cohen, Sebastian and contributor Q!

1) What are your thoughts about how the Browns handled the offseason?

I am generally pleased with how the Browns handled the offseason. Replacing John Dorsey and Freddie Kitchens with Andrew Berry and Kevin Stefanski seems to have gone a long way toward finally aligning the vision throughout the organization. The player acquisition portion of the offseason addressed some of the team’s most glaring needs in the secondary and offensive line. And by all accounts the Browns did the best they could getting the players up to speed and comfortable with the altered training camp given the COVID restrictions. Aside from injuries suffered in camp, I would label the offseason as a success.

Overall, I am pleased. I think the Browns were further away last season than others believed. Ultimately, Freddie probably costs the team a total of two games due to poor game preparation and playcalling. I would be surprised if Stefanski is amazing, however, I would be stunned if he is anything worse than average.

Also, I am a huge fan of the outside zone running scheme, especially the Shanahan/Kubiak version. I was also a huge fan of Todd Monken’s air raid offense, but the Browns did not run anything resembling that system.

Ultimately, there is no excuse for the offense to be anything but substantially approved. The line is much better, the tight ends are better, and the running game is as good as ever. If Baker and the receivers resume their 2018 form then they should score, a lot. I’m terrified about the defense, but overall, if they’re below average than that will be a win.

I think the Browns had their work cut-out for them following two of the most turbulent of seasons having gone through three coaches. One cannot underestimate the chaos any organization goes through when leadership is shuffled around so much. And for a team trying to foster the growth of a young QB in Baker Mayfield it is the worst possible thing they could have done.

All that said, I think the Browns have done a wonderful job in bringing in Stefanski. One can almost feel the change in Berea; like a ship buffeted by incessant storms suddenly calm in way only a steady hand on the wheel can produce. Hue was a jackass. Gregg was never the solution and everyone knew his time was short (even though perhaps he deserves more credit than he got) and Freddy was akin to utter chaos and way over his head. Stefanski is the cool head and a natural leader. He is exactly what the team, and especially Baker Mayfield, need to steer a course to the promised land.

The coaching change is everything. All success will flow from that. The personnel changes are almost an afterthought in comparison. That said, I think the Browns did an excellent job firming up the offense. One cannot understate how much the offensive line needed help, and man oh man, did they go out and get some. That new O-Line solves a lot of problems. Adding Hooper to that to get some steady high-end TE work is also going to pay dividends.

So, when you have a young QB on the cusp of being a truly great player, you have to maximize him. So I don’t begrudge the Browns blowing their wad on that side of the ball. That said, I think they could have done more to address the linebackers corps. Injuries are part of the game and they left themselves open to a thin secondary before Delpit got hurt. Thankfully, the Ronnie Harrison trade gives them a decent chance to be solid.

Lastly, Case Keenum is a huge get. Cannot say this enough. If Baker fails to progress or gets hurt the season is not over and Baker can learn a lot from him.

I think the Browns handled the offseason like a mature organization, and I’m happy about that. They didn’t use free agency like a shopping spree. They looked at the roster, discussed with the coaching staff what pieces were needed in order to effectively run their schemes, and addressed those deficiencies. I’m not an Austin Hooper fan, but it’s clear that Stefanski said he thought he needed a reliable tight end to run his scheme. If we have an organizational philosophy of building our roster from within and through the draft–then use free agency only as a means to address where that talent pipeline turned deficient, or to address injuries? That’s a recipe for success in my book.

2) Who is the one player on each side of the ball that you think will make himself a household name?

On offense I will go with Jedrick Wills becoming a household name…in a bad way. I believe that the rookie left tackle will struggle early on in the season due to a combination of the abbreviated offseason program and the difficult transition from the right tackle to the left tackle position. I hope and trust that Stefanski is prepared to help him in pass protection with the RBs and TEs, but I anticipate a few instances early in the season where he gets blown up in an ugly way. This will inevitably get fans riled up.

On the defensive side of the ball I’ll go with BJ Goodson. Most casual fans are likely unfamiliar with this free agent acquisition from Green Bay. Due to an injury to promising 2nd year player Mack Wilson and the departure of Joe Schobert in free agency, BJ Goodson is slotted to get the lion’s share of the snap count at MLB. Goodson is a physical run defender who will be key against the gritty AFC North ground games. His (and in turn the Browns defense’s) ceiling will be dictated by his performance in pass coverage. It has not been a strength of his in the past.

I think Nick Chubb is in the MVP conversation… but in terms of players nobody really knows, I think Harrison Bryant is a gem. I also think Denzel Ward, if healthy, will be a top-10 cornerback.

I think on offense Austin Hooper is going to have a huge year. Stefanski likes his TEs and with the talent the Browns have soaking up attention I think he will find himself open a lot.

On defense I hope that name is Greedy Williams. If he has a huge year it probably means the Browns are winning a lot of games.

A name I don’t want to see getting a lot of attention is Case Keenum. He is perhaps the best backup QB in the league but if he’s making headlines it probably means something really bad happened one way or another with Baker.

Are Baker, Chubb, Hunt, OBJ and Jarvis already household names? If you say no to any of them, then they’re the answer on offense. In Stefanski’s system, and with the potential this offensive line has, Chubb has a chance to lead the league in rushing. But I’ll go for a deeper cut and say on offense, Donovan Peoples Jones is going to make himself a Cleveland-area household name. He’s going to challenge Higgins for that third WR role and is going to be a player fans ask why he’s not on the field more.

On defense, Larry Ogunjobi looks poised to break out. Interior pass rush is one of the most valuable things on defense, and Ogunjobi, if he stays healthy, should show us why the Browns are high on him.

The Browns have not had much luck picking head coaches recently, but I am cautiously optimistic with what I have seen from Kevin Stefanski so far. He looks and acts the part during media availability and from what we have seen on the practice field. He’s well-spoken with a calm, confident demeanor. He seems to be a great communicator who values accountability. The real test begins this Sunday. With no preseason, Stefanski does not get a true dress rehearsal for the juggling act of being the leader and head coach of an NFL team while also calling the plays on offense. It was far too much for Freddie Kitchens to handle, but I have confidence that Stefanski will step up to the challenge.

As noted above, I have high confidence in Stefanski, but I don’t think that means anything more than a few wins.

My confidence is really high. He is a natural leader and has a track-record of success. He has far better tools than he ever had in Minnesota and I think the offense is going to be something super special. I think he is the man to turn all that talent into a unit acting as one.

Now, don’t fret. I like Stefanski. I really like Berry. However, a new coach, new offense, new defense, young roster, without a normal offseason because of COVID? I don’t have confidence that we’re going to see our coaching staff’s ability translated to the field. I think we’re in for a rough season. So, while my short-term confidence is low, my long-term confidence in Stefanski is medium-high.

4) The ultimate question: What’s the record for the 2020 Cleveland Browns? Playoffs?

The Browns will go 8-8, narrowly missing out on the final Wild Card spot. They will show clear signs of growth and improvement on the offensive side of the ball, but injuries will pile up defensively and cost them some winnable games in the 2nd half of the year.

8-8. There is still a ton of variance. I don’t feel comfortable predicting more than a .500 record.

I think the Browns are going to be asking themselves the same question their brothers over at the Jake ask themselves: Why the hell couldn’t we be in another division?

It is very tough to try to bring everything together and winning the division or making the playoffs when facing the Steelers and Ravens four times a year. Truly.

I think the Browns may struggle early. The lack of a preseason will tell. This unit has not had a lot of time together in a good situation. They need reps playing under Stefanski. Add to that the D which is already thin on bodies.

Stefanski has to get that Offense to gel and to be working on all cylinders because the Defense may struggle either from injuries taking their toll, or simply from the weaknesses within the structure (mostly poor LB play). If Baker plays well, they may look a lot like the Chiefs a couple years ago: Juggernaut offense making up for a porous Defense.

I think the Browns struggle early but come on strong the second half of the season. I think they can go 9-7 or even 10-6 with a good shot at a Wildcard berth. Short of a disaster in terms of injury or a total regression from Baker, it is hard to see them doing worse than 7-9.

8-8. If we somehow beat the Steelers twice, that has a chance to move to 10-6. I’m concerned about how good that Steelers defense looks on paper. Minkah is going to be a thorn in our side for a long time.