See what Santa has in store for the Browns on his naughty and nice list, will the Browns win? 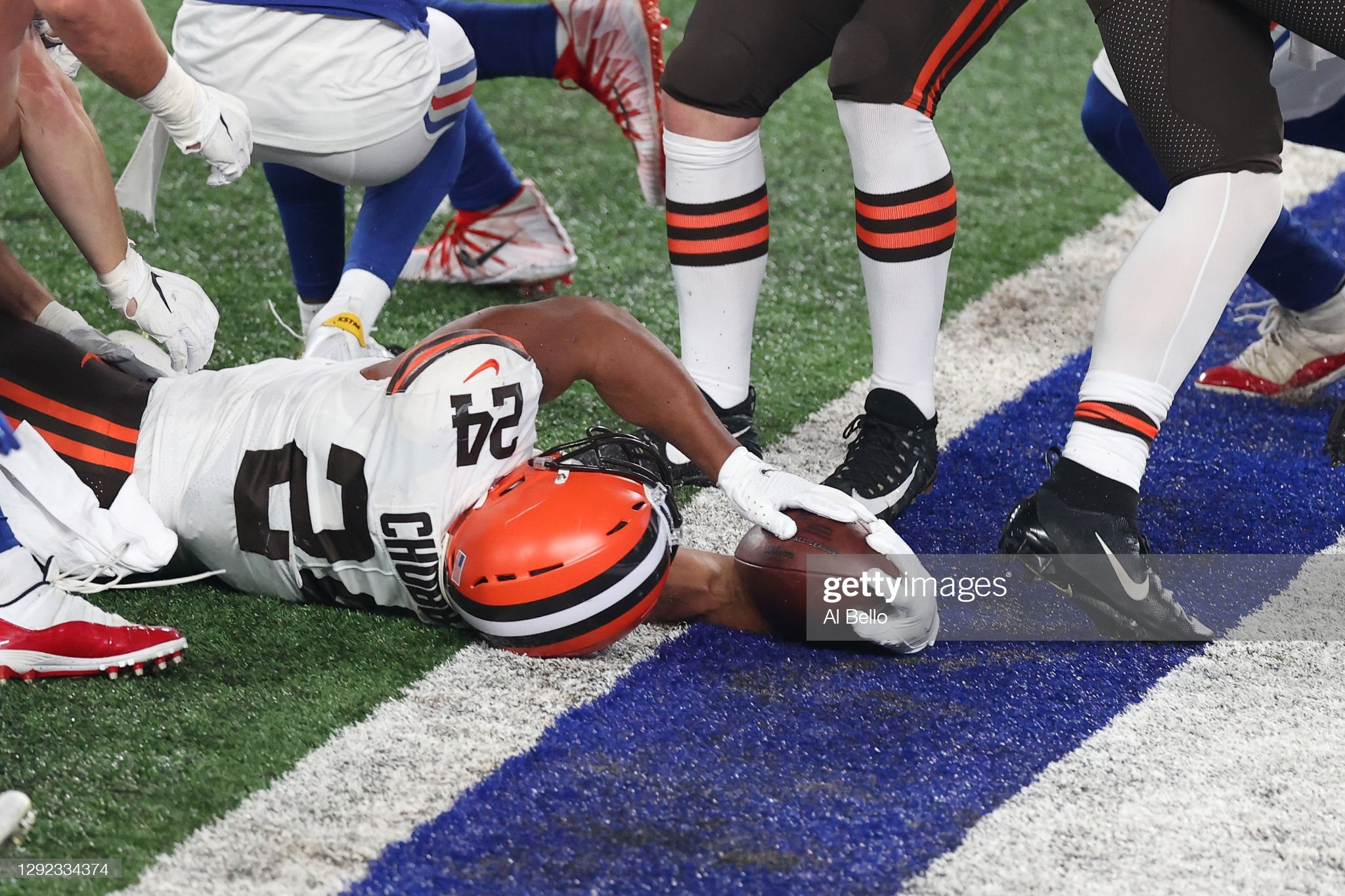 EAST RUTHERFORD, NEW JERSEY - DECEMBER 20: Nick Chubb #24 of the Cleveland Browns rushes for a one yard touchdown during the fourth quarter of a game against the New York Giants at MetLife Stadium on December 20, 2020 in East Rutherford, New Jersey. (Photo by Al Bello/Getty Images)

It’s another glorious Sunday morning in the NFL and there is no better way than to kick off with a Browns Roundtable! The Browns enter week 16 with a lot on the line, a playoff spot and possible chance at a division title for the first time in 20+ years. Not to mention, it’s the time of year where we have naughty and nice lists. Let’s get to it!

1) Last week the Browns took care of Browns Christmas Past. What did you take away from the Giants game?

That the Browns franchise has finally arrived. To go on the road, in primetime, against a hot team and just completely dominate them was really, really impressive. It was all business; a professional beatdown. That is what contenders are supposed to do against inferior teams and the Browns got it done. The Browns started from the bottom, now they’re “here”…at last. (Channeling my inner Baker Mayfield, here).

The Browns are actually a good team and they are very well coached. And in the past, even during the playoff year and in 2007, and hell, 2018, the Browns often played to their level of competition or were caught looking ahead a week.

Not anymore. Stefanski has this team dialed in most weeks, and fully prepped. The team is not overlooking weak teams and they are executing. This is a playoff team and they play like it.

My major takeaway is that the Browns are a good team. An easy, effortless win over a bad team? One where we didn’t really have to do anything special to win easily? Those games are rare in the NFL. This is what a good team that is well-coached feels like. This is only year one. Get used to this feeling.

It was a methodical win over a team we were supposed to beat. I can’t say it enough, this feels like a new era of Browns football where we beat the teams we are supposed to beat, and it feels great. Baker again looked surgical out there. The Browns had a tough time running the ball, but from what I’ve seen, the Giants have one of the top defensive lines in the game.

Every back-7 player on defense sans Ward and Harrison. Joe Woods as well.

I really expected to be able to pick a player out of each position group to put on this list, but that’s all I have.. and that’s a refreshing change from years past.

Only person on my naughty list this year is Sendejo. I know he gets more flack than he should, but every time there is a big play against us I think I see number 23 trailing behind it.

Every contributor on offense (seriously), Garrett, Ward, Harrison. Vernon has also quietly put together a quality season. And Kevin Stefanski has been a godsend.

Baker Mayfield. Of course, Chubb is their MVP but I want to say something about dear Baker.

It is no secret that his regression last year was very disappointing. His apparent “Summer of Baker,” i.e., making commercials, hanging with movie stars and generally not doing much prep, really called into question his long-term viability. He came into the 2019 season soft and flat. He did not look prepared and it really showed up in his play. So now, coming in 2020 with a new coach and no Pre-Season, there is this huge question mark and the belief that this was his make or break year. Especially as it become clear earlier this season that the rest of the Browns offense was really good. The O-Line, the running backs, all top notch. The question was becoming whether or not Baker was going to bust, be a mere game-managing QB, or return to form. And if the former were true, what would it take to bring someone like Matt Stafford to Cleveland because the offense was built to win now and in the next few years.

Baker showed some solid improvement over the first 10 weeks or so of the season. And then something began to really click for him. I think in the past four games, against some really great defenses, Baker has more or less settled the question of his role. Barring an unfortunate collapse, he looks like he is growing into the role of franchise QB. He still has some ways to go before he can be anointed as being in the same hallowed company of the likes of Rodgers, Wilson or Patrick Mahomes, but he is playing like a Top Ten QB. And that has me ecstatic.

The Browns front office, including Haslem, is on the nice list. It’s such a change to have confidence in your teams GM, coaches, etc.. I believe we have the people in place at those positions to change the culture in Cleveland and not just be a one year wonder.

4) Brownsmas Present is the New York Jets. Any reason to worry? Predictions?

No reason to worry at all. The Jets finally got the 0-16 monkey off their back last week and surely will be hungover for this one. Plus, the whole league was put on notice with the Jets beating the Rams and the Bengals beating the Steelers. On any given Sunday, anyone can win. Most importantly, the Browns have won every game they were supposed to win this season (which is remarkable, by the way). No way they overlook anyone now.

That said, on any given Sunday… ask Rapistberger (for the past three weeks) and the stately Jared Goff about that one. The Browns cannot overlook the Jets, or be caught thinking about the fast fading Steelers or the Division Title. For Coach Stef and Co. it is one week at a time, and winning every game. So I fully expect the Browns to thump the Jets a bit. Especially with Ward and Harrison potentially back. I think we’ll see something along the lines of the Giants game.

12/26/2020 COVID Edit: The Browns need to really bring it in this game. They have to treat it as a make or break game. Losing your WR corps is a tough break, and the NFL refusing to move the game is typical. So, that means they need to play some good football and treat the Jets like the Chiefs. They are going to have to run the ball down their throat and use Hunt as a receiver more often. Their defense has to be on point. They need to harry Bad Face and make him pay when he makes bad decisions.

It’s the NFL. Any team can win, as we saw last week when the Jets beat an overly confident Rams team. The Jets can make short passes, and they’re going to try and run the ball with geriatric Frank Gore. Their defense was stout against the run, but that should weaken with Quinnen Williams out. The Browns should win comfortably, but you can’t take any team for granted–not even the Jets. While the front office would love for them to go 0-16 and land the #1 pick, the players and coaches are still trying to win every game they can.

Browns win 27-9. I see this game going sort of like the Giants game. We should be able to run the ball better, and control the clock and game flow. BONUS- Colts also beat the Steelers and its ON for the division next week.