The Browns enter week 4 heading into a big game with the Dallas Cowboys. See what our writers and staff think of the offense so far, the coaching staff and what awaits in Dallas 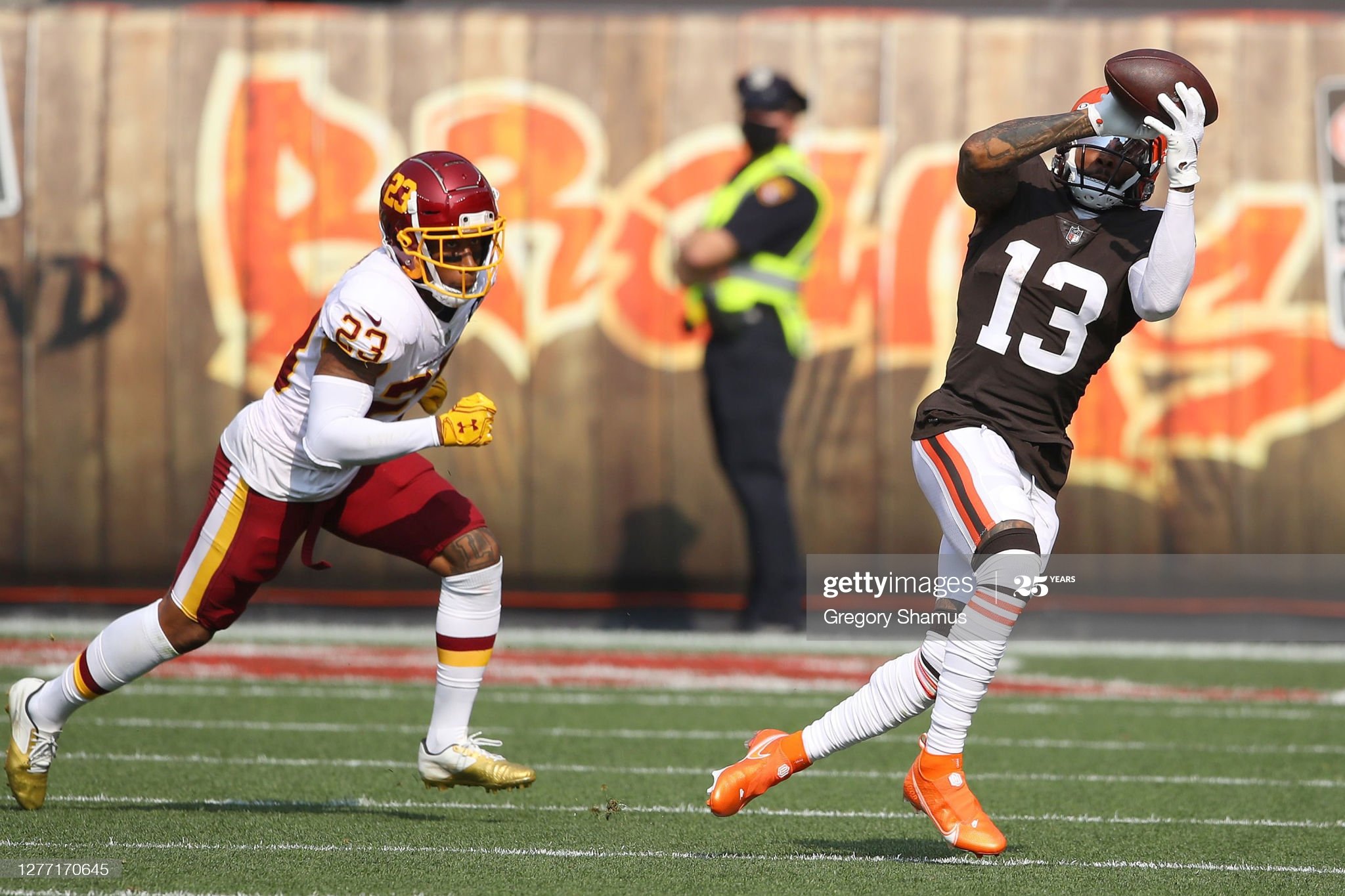 CLEVELAND, OHIO - SEPTEMBER 27: Odell Beckham Jr. #13 of the Cleveland Browns makes a catch in front of Ronald Darby #23 of the Washington Football Team at FirstEnergy Stadium on September 27, 2020 in Cleveland, Ohio. Cleveland won the game 34-20. (Photo by Gregory Shamus/Getty Images)

Hello again, everyone, and welcome to the Cleveland Browns Roundtable! We will ask questions of our RBF staff and see where we think the Browns are in relation to the season.

The Browns enter week 4 heading into a big game with the Dallas Cowboys. You can check out our preview of week 4 here and see what we think the Browns need to do to win. Without further ado:

1) Can the Browns continue to run their offense through Chubb and Hunt and limited passing?

Against a good chunk of the NFL, yes. Week 3 against Washington was telling for me. While not a great team by any stretch, Washington boasts an impressive defensive line running wide-9 that I was very interested to see against the Browns run game. The results were very positive against potentially the 2nd best DL the Browns will play all season (I’ll give a slight edge to Pittsburgh). The true test will be if the Browns can come from behind to win a game against a good team with this commitment to the run game. Week 1 against the Ravens does not inspire confidence, but there were also many other factors at play.

They should do it as long as it works. Eventually teams are going to have to dare Baker to make big passes as they start to stack the box more. Chubb is Chubb. A premier running-back. I think they would rather take their chances with Baker.

Not only do I think they can, I think they should. Everyone loves fantasy football stat machines, but with our offensive line and set of running backs there’s no reason we can’t shorten the game by being a run heavy team. This would only help Baker’s development long-term. Remember Big Ben and Russell Wilson came into the league on run-heavy teams and allowed the game to slow down for them and make easier reads on pass plays due to the threat of the run.

2) How are you feeling about the Browns chances in the AFC? Can they make the wild card?

Decent, but not great. I think when push comes to shove the Browns may be on the outside looking in when the playoffs roll around. When thinking about the AFC playoff picture, six “locks” come to mind barring significant injury: Baltimore, Pittsburgh, Buffalo, New England, Tennessee, and Kansas City. With seven total playoff spots available this year, that leaves the Browns competing with teams like the Colts, Raiders, and potentially Texans (assuming they turn it around after a brutal opening schedule) for that last playoff spot. The next three contests against Dallas, Indianapolis, and Pittsburgh will be quite telling for the Browns.

The Browns will likely be fighting for that 7th playoff spot. It’s tough to predict them to jump teams like Tennessee, New England, and others that have playoff experience. The next three games (Dallas, Indy, Pittsburgh) will tell us a lot about the Browns playoff chances.

3) The Browns head to Dallas Sunday. What is your level of confidence that the Browns coaching staff can keep the Browns in the game?

Not high. Critics have pointed out that the Cowboys defense has not been impressive so far this season, but they have faced excellent offenses every week. On the flip side, the Dallas offense is loaded with weapons and will assuredly move the ball with relative ease against the Browns defense. Any hope of a Browns victory depends on their ability to win the time of possession game with a successful, consistent ground attack. When the time comes, Baker Mayfield will have to make big throws and avoid turnovers to keep drives alive. A Browns win is possible, but I am less than confident.

I have supreme confidence in the coaching staff. I think they will game-plan this well. And any team with an offense like the Browns have should be in any game. Moreover, the Cowboys have been going through their own struggles.

That said, the defense is going to have to play really well. Dak and Zeke have been playing really well even if the team has been losing games.

I am confident in the coaches doing their jobs. After listening to Stefanksi being mic’d up I think for the first time since the return of the Browns, we might have our coach. I’d also like to find a way to keep Callahan here for a long time given his work with the offensive line.

4) Prediction for Sunday in Dallas?

The Cowboys offense proves too much for the mediocre Browns defense to contain. The Browns put together a valiant effort offensively to keep up but fall just short. Dallas wins 37-27.

I think the Browns will surprise people, but it will be a close game.

Dallas’ offense is for real, and I don’t see our defense being able to stop them from scoring very often, so it will be up to the offense to slow the game down by running the ball. Remember, Dallas is an onsides-kick miracle finish away from being 0-3 so there’s no reason the Browns can’t win. 27-21 Browns.

And that’ll do it! Check back next week, where we will look back and forward to see how the team has performed!