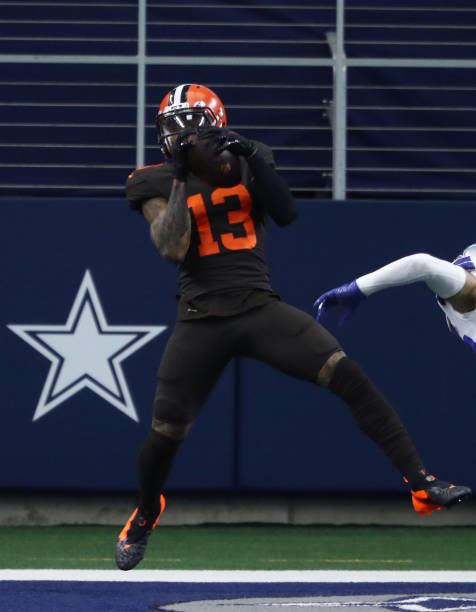 Hello everyone and welcome to week 5! Before the Cleveland Browns take on the Baltimore Colts, let’s look at how our Writers feel about the Browns so far this season!

1) The Browns are among the top scoring offenses in the NFL. Do you see it continuing?

Yes. I think the offense has been clicking due to things that are repeatable. Coaching, playcalling, offensive line play. It’s what catapulted the Rams to the front of the league. It’s what brought the 49ers to the front of the league. It’s what we’re seeing here. We’ve done all this without Baker doing anything exceptional at QB and it’s been fun to watch. I do expect other offenses like the Chiefs to start clicking and top us in points per game. I also don’t expect another offensive explosion like Dallas to happen again. But, we can consistently be one of the top 10 offenses in the NFL with the repeatable things we’re already doing.

Everything in the NFL is fickle. The injury to Nick Chubb is proof positive that at any time, a major weapon can be taken away. However, the front office has added better depth than I can remember as a Browns fan.

D’Ernest Johnson stepped right in behind Chubb and a nicked up Kareem Hunt without any drop off in production. As long as the Browns offensive line continues to stay relatively healthy, the backbone of this offensive success will remain intact.

The Colts, with their strengths matching up so well with the Browns strengths on the other side of the ball, will be a fascinating matchup. The Colts have a dink and dunk passing attack, and that is the Browns defensive area to improve. The Colts rushing defense has been strong all year.

Vegas odds makers have moved from beginning the Colts should be favored on the road to calling this game a pick’em. I’m in agreement that the Browns have their most revealing game since week one in front of them.

Yes. The offensive scheme, playcalling and the personnel are all a perfect match. Even without Chubb, we saw last Sunday what Hunt and Johnson are capable of. This offense should continue to be able to gain yards and put points on the board, so long as they continue to take care of the ball. If anything, I see the offense improving as Baker becomes more comfortable with it.

2) 4 weeks in, who are your offensive and defensive MVPs?

Do these have to be players? Because on offense, Stefanski, Van Pelt, and Callahan deserve the highest of honors. To do what they’ve done so far in a COVID-restricted offseason in a brand new situation is probably the most impressive feat in the NFL so far this season. If you make me pick a player, on offense, it’s Wyatt Teller. He’s embodied the spirit of that offensive line this year and that entire group has been a blast to watch.

On defense, Myles Garrett. He’s becoming like LeBron where you don’t even need to say anything about him–we all know how great he is. I think he’s the current front runner for Defensive MVP of the NFL this year.

For the Browns, I have the feeling everyone will vote for Wyatt Teller and Myles Garrett. They deserve the appreciation for turning games around single-handedly.

But instead I’ll point out the play of my most underrated contributors: JC Tretter and Denzel Ward.

I was optimistic Tretter would be on the field for the first few games of the year, but I can’t say I was certain. I was pretty sure I’d see Greedy Williams by now, so props to Tretter for having his body ready after a surgical procedure so close to week one. Not only did he make it back out, but he has played his best football since joining the Browns. He has not surrendered one sack while only picking up one penalty, making calls at the line.

Ward is in a position where he needs to play tight coverage against the best receiver on the opponent’s offense while a zone muddles the rest of the field. Against top competition who could usually make catches very few can, he has only allowed 13 receptions to 22 targets and sealed the victory last week against the Cowboys. He, along with Myles, is the irreplaceable on this defense.

The only answer right now is Wyatt Teller and Myles Garrett. Both have had an unprecedented start to this season.

3) Have your expectations changed for this season?

Sort of? I’m more optimistic right now about our record and our chance at the playoffs than I was at the beginning of the year. I thought with a young team, a new coaching staff, and no real offseason, we were going to struggle out of the gate. However, my expectations are that we don’t rest on our laurels. I want to see Stefanski and Van Pelt push the envelope of offensive play calling. I want to see more motion. I want to see more motion at the snap. I want to see us start to work on getting Baker right in the NFL. I guess I think we have a chance to get a better record than I originally thought, but I care more about developing this organization into the juggernaut it can become. I care about the next 5 years more than I care about this one–but that doesn’t mean I’m not enjoying the ride already.

The most influential variable to my outlook changing on this team is the level of comfort I see in the system and with these players.

Nobody blinked an eye when the Browns dropped the first game on the road to a very polished Ravens team. They found their groove halfway through the 2018 season and haven’t changed much.

But what Stefanski has been able to do explaining his vision of a completely different offense during the restrictions of Covid cannot be understated. The Titans season is imploding right now because shortcuts were made in the name of practicing full go. The Browns have balanced preparation with caution, and it’s is a marvel

Not really. My expectation before the season was to compete for the playoffs and that is still my expectation. With that said, this offense has surpassed my expectations to this point, while the defense, outside of forcing turnovers, has disappointed to this point. Overall, I expect this team will be battling for a playoff spot in the last few weeks, like they were in 2018.

4) How to you feel about the game Sunday? Prediction?

I think Indianapolis is overrated. I love the team they’re building over there, but I think Rivers is washed and that offense has no play makers. It’s tight, and any competent NFL defense should be able to lock them down. I hope our defense is at least competent on Sunday.

The Colts are a team that’s hard to beat in the NFL regular season. They don’t beat themselves. They play solid football, and you can win a lot of games if you don’t beat yourself.

As long as Baker doesn’t turn into a pumpkin and turn the ball over multiple times, I expect us to win 27-17

I do not believe the Browns beat reporters want to set fans up for disappointment, and they all have the Browns losing a close one.

I think this will be a low scoring affair, especially with the Colts left tackle likely out. The Colts will struggle running the ball but make a lot of third down conversion throws to stay on the field.

I have the Browns winning by a field goal, but it will be a physical defensive matchup.

The Colts game is a pick ’em right now, and I’m going with the Browns. The Colts defense is legit, but they will be missing a few starters due to injury. While the Browns defense surrenders plenty of yards (and points), the Colts offense has struggled a bit to this point. If the Browns win the turnover battle, they win this game. They will win both.