The exciting, weird and chaotic 2020 NFL season rolls on with the Cleveland Browns hosting the Las Vegas Raiders. 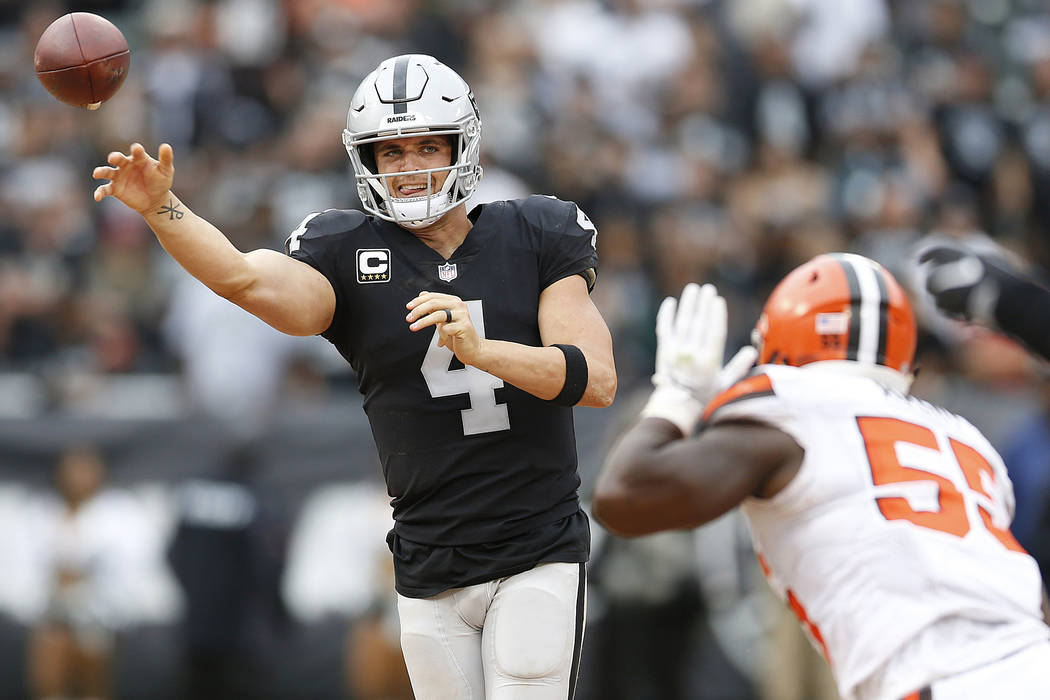 The exciting, weird and chaotic 2020 NFL season rolls on with the Cleveland Browns hosting the Las Vegas Raiders.

When the Raiders have the ball:

The Raiders offense is led by Derek Carr, an up and down yet ultimately successful NFL QB. Carr has had his ups and downs, but this year is definitely an up year for Carr. The Raiders have been better at attacking down the field this year, with Carr more willing to air the ball out. However, Derek Carr is what he has always been, and that is a QB who LOVES to get the ball out quick and avoid any and all types of pressure.

The main weapon the Raiders use is Darren Waller, an Über athletic tight end who the Raiders target a lot. A massive mismatch with his size and speed, he has developed into one of the best pass catching tight ends in the NFL.

The Raiders also used their most recent top pick on wide receiver Henry Ruggs III. While he is not targeted as much as their current number 1 Nelson Agholor, Ruggs has an astonishing 26 yards per target. With Carr’s willingness to go deep more, Ruggs has been one of the best “take the top off the defense” threats in the NFL.

Josh Jacobs is also a former 1st rounder who has a lot of talent. While he is slightly more reliant on having a quality offensive line in front of him, Jacobs is a master at making the first man miss. In a game where the weather may dictate a good amount of running, the Raiders have a good one.

The biggest question is what is going on with the Raiders offensive line. They were hit by COVID-19 and injuries and are down, at least, their best guard in Richie Incognito. If Trent Brown also does not play, the Raiders are in trouble along the offensive line. When healthy, this is one of the best groups in the NFL, on par with the Browns.

The Raiders defense is not very good at all. While they are not coached up to be all that great, they also lack a lot of talent on that side of the ball. Their best position is up front, where they boast a good amount of interior defenders, including great run stopper Jonathan Hankins. They also have one decent pass rusher in Maxx Crosby, a gem of a hit in the back half of the 2019 draft.

Unfortunately for the Raiders, the haven’t hit on their top pick in that draft in Clelin Ferrell. A stat that has been talked about a lot is that Myles Garrett has more sacks than the entirety of the Raiders defense. Their pass rush is just not good enough to have any impact on games.

The Raiders also spent a ton of money on linebackers who aren’t impacting games in the NFL and offer little resistance to opposing teams. The best part of their defense has been on the back end of the defense. 2nd year men Trayvon Mullen and Jonathan Abram are both good players who play a solid role in the defense. However, there is a question about Mullen being used properly in their zone defense.

Ultimately, it looks like this game should be a real shootout, weather permitting.