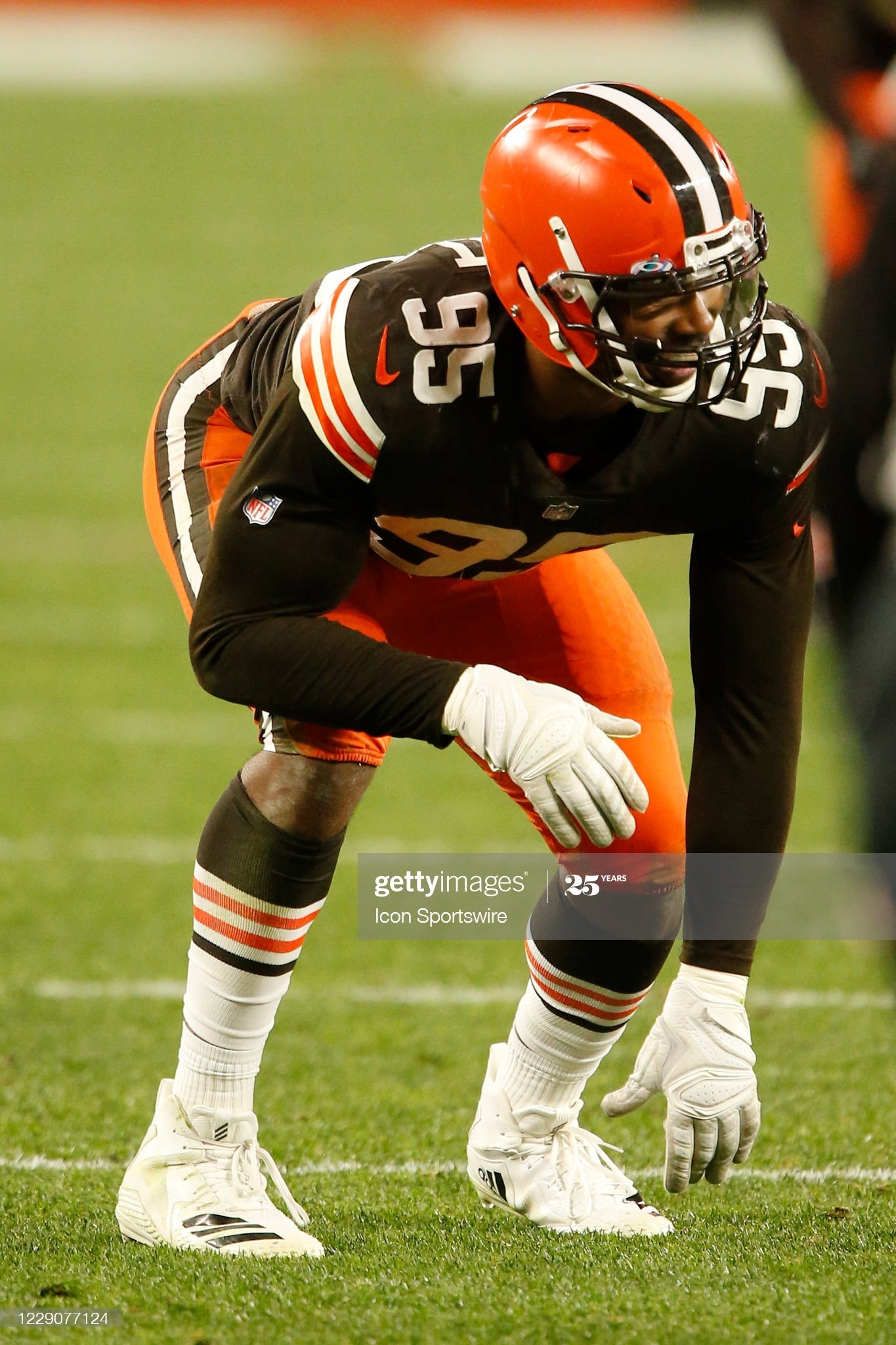 CLEVELAND, OH - OCTOBER 11: Indianapolis Colts Defensive End Ron'Dell Carter (95) in game action during a NFL game between the Indianapolis Colts and the Cleveland Browns on October11, 2020 at FirstEnergy Stadium in Cleveland, OH. (Photo by Jeffrey Brown/Icon Sportswire via Getty Images)

The 4 and 1 Cleveland Browns travel to the Ketchup Factory Sunday to play the 4 and 0 Pittsburgh Steelers. The game will be played at 1 p.m. EST, on CBS with Jim Nantz and Tony Romo on the call.

Chaos reigns supreme when the Steelers defense is on the football field. In the secondary, the Steelers have been surprisingly ineffective in coverage, but have a league leading interception rate. They gamble a lot on the back end, resulting in yardage being given up and their corners can be beaten. Old friend Joe Haden and Steven Nelson have seen a big drop off in coverage this year. Minkah Fitzpatrick has been largely average and the rest of the defense is so-so, although watch out for the Mike Hilton Blitz.

The Steelers rush defense has been, in a word, incredible so far this year. Even though they allowed a 70 yard run to Miles Sanders, the Eagles barely broke 120 yards rushing. They are physical and will attack the ball carrier as many Steelers defenses of old will often do. The curtain has been given a fairly easy schedule to start the season, but they have simply dominated teams in the running game. The Browns rushing attack will be in for a hard, long day. It bodes well for the Browns if they can maintain their tremendous rushing attack against the Steelers defense.

The biggest matchup, however, will be held in the titanic matchup of Browns offensive line vs the Steelers pass rush. We all know what the Steelers pass rush looks like, TJ Watt has destroyed Browns teams in the past. Bud Dupree has been a solid 2nd rusher and the Steelers come from so many different angles and weird positions. The Browns offensive line, missing key starter Wyatt Teller, will need to be on their toes. Whoever is in at running back during pass pro must be keyed into the defense and see where the unblocked man will be coming from, to protect Baker from bad, untouched shots to his ailing ribs.

The Browns offense has been operating at historic levels so far this season, scoring 156 points, 3rd most in the NFL. Without Nick Chubb and Wyatt Teller, this will be a monumental task ahead of them Sunday to keep their scoring streak alive. The Browns still don’t know if they will even have Odell Beckham Jr on the field Sunday yet either, so this will be the ultimate test for Kevin Stefanski, Baker Mayfield and everyone else on the Browns offense.

When the Steelers have the ball

Big Ben has played excellent coming off his season ending elbow injury last year. In very unlike Big Ben fashion, he has been one of the quickest Quarterbacks to get rid of the ball so far this season. Ben has totally changed his game and the Steelers have been more focused on quick passing than the deep passing game we have known them to be for years.

In the Steelers last game against the Eagles, the NFL saw a breakout performance of rookie wide receiver Chase Claypool, who fans have now been affectionally calling “Mapletron” as a nod to his Canadian roots and his play on the field mirroring that of former NFL great, Calvin “Megatron” Johnson. Also returning to form this year for the Steelers is Juju Smith Schuster, who has been more of a WR #2 than a true dominating WR. The duo can carve teams up quickly when they have the ball in their hands.

The Steelers have no shortage of receiving talent, as they still have players like the ultra-fast Diontae Johnson, big play threat James Washington, gadget guy Ray-Ray McCloud and tight end Eric Ebron. Ben will be quick to get the ball into the hands of his playmakers and let them make a play for him, rather than the other way around.

The Steelers passing attack has a lot of teeth, but their rushing attack has been stale and unimpressive. James Conner has been given the majority of the load and has been solid but unspectacular. Benny Snell looked to have sized the lead back role, but fumbling problems have kept him on the bench. Watch out for explosive rookie running back Anthony McFarland, as he can break off huge chunk plays in the running game when given a chance.

The biggest struggle so far has been on the Steelers offensive line. Injuries to Zack Banner and David DeCastro have really effected the offensive line. Alejandro Villanueva, a stalwart at left tackle, has been showing signs of ineffectiveness this year, while Maurkice Pouncey has been dealing with his share of injuries. The struggles on the line have lead to the problems in the running game, although the quick passing attack of the Steelers has helped their line tremendously.

The Browns defense has been largely average in comparison to other NFL defenses this year, by the numbers. While they have given up a lot of points, it should be noted that the Baltimore game at the beginning of the year has largely skewed that towards the negative. However, having said that, key injuries have led to more forced changes in this game and could be a cause for concern again for the Browns.

Myles Garrett will have his pick of where to pass rush in this game. And so far this season, that strategy has worked extremely well for the Browns. Surprisingly, the Browns rush defense has been solid, and a returning Larry Ogunjobi should help that out immensely in this game.

Where the Browns will be tested in this game is in the secondary. Smith Schuster and Claypool will get their catches, but the key will be to limit their yards after the catch. Do not expect a lot of pass breakups, but the Browns will need to limit them to a lot of short yardage gains. The Steelers offense has seen them employ a lot of their new QB coach Matt Canada’s style of offense. Expect to see weird offensive sets and a lot of motion. The Browns need to be disciplined and not get themselves out of position in this game, or it could be a real shootout.