To the relief of many Browns’ fans, the Browns used the tenth overall pick on an offensive tackle, did not trade down, and did not try to outsmart everyone by taking a second-tier prospect. Instead, they selected Jedrick Wills Jr. from the University of Alabama. 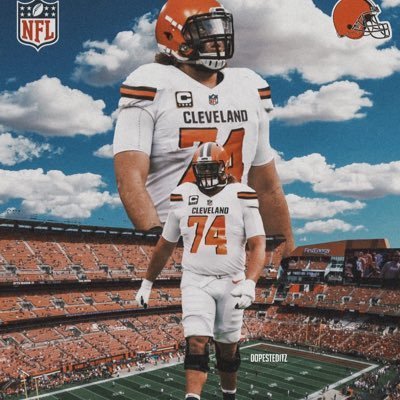 To the relief of many Browns’ fans, the Browns used the tenth overall pick on an offensive tackle, did not trade down, and did not try to outsmart everyone by taking a second-tier prospect. Instead, they selected Jedrick Wills Jr. from the University of Alabama.

Wills played right tackle in high school and was a five-star recruit and the number 25 prospect in the country. After coming to Alabama, Wills started as a true sophomore at right tackle and, quickly, became one of the clear future NFL offensive tackle prospects.

As a linemen, it is tough to get better than Wills. Per PFF, while at Alabama, Wills allowed pressure on only 3% of his 970 pass-blocking snaps. Additionally, the raters at PFF argue that Wills’ “run-blocking grade” was sixth best amongst all offensive tackles in the FBS.

Wills’ run-blocking is definitely better on runs that go off-tackle and/or outside. He is a bit weaker on inside rushing lanes and tends to struggle against speedier rushers with spin moves. For Kevin Stefanski’s outside-zone scheme, however, this will be less of a problem.

Perhaps ironically, Wills is incredibly versatile at controlling pass-rush coming from the outside that is trying to move inside. The best example of this is Alabama’s 2019 game against LSU. K’Lavon Chaisson – LSU’s edge rusher and the 20thoverall pick to the Jacksonville Jaguars – registered five solo tackles, five assisted tackles, and 3.5 out of those ten were for a loss. But, he also registered only one pressure.

Still, in games where Alabama ran more zone-blocking – like against Auburn – Wills was completely dominant. Stefanski will have to use lots of outside-zone running plays as well as tight ends to help chip block early in Wills’ career. Fortunately, as I have detailed here, this should not be a problem.

Another concern is that Wills has never played left tackle – not in high school and not in college. Andrew Berry, Kevin Stefanski, and Paul DePodesta have all said that Wills will play at left tackle and that they are not too concerned about the transition. Nonetheless, outside of elite players like Tyron Smith, Bryan Bulaga, and Andrew Whitworth, switching from the right side to left side tends to be a rare feat.

Nonetheless, from a technique standpoint, Wills is the best tackle in the draft and one of the best over the past decade. Even if, early on, he struggles with power running schemes and switching sides, Wills should be prepared to be an effective blindside tackle from day-one.

-I really like what the Minnesota Vikings did in the draft. They are a team that has embraced analytics and cares about positional value. To that end, taking the best slot receiver and slot cornerback in the draft were both brilliant moves. Jefferson caught 92.3% of all contested catches in 2019 and Burrow had a 121.4 passer rating with Jefferson as the main target. This gives the Vikings a different type of receiving threat than Diggs, while also helping Cousins where he is best: short-to-intermediate throws. On the other end, Jeff Gladney forced the second most contested targets over the last two seasons and allowed only 46.6% of passes to be completed. Both moves should really help the Vikings continue to compete in the NFC.

-On the other hand, I have absolutely no idea what the Raiders are doing. Yes, Henry Ruggs’ speed will be very useful in Gruden’s West Coast offense. And yes, Damon Arnette is a solid number-two cornerback. But I am not sure that analyzing prospects as 90th percentile outcomes is the best way to select prospects. Only ten percent of players ever reach that level. It is substantially more likely that Ruggs ends up as a utility burner and Arnette as a depth cornerback than the better outcomes. To me, players like CeeDee Lamb, Jerry Jeudy, Jeff Gladney, and Kristian Fulton would have been more sensible choices.

-The Los Angeles Chargers continue to ignore prospect and positional value. Drafting a quarterback with major decision issues and an off-ball linebacker that struggles in coverage just seems to be decisions that will eventually come back to bite this franchise.

-I have no issue with the Chiefs selecting a runningback with the last pick in the first round. I do have an issue with them taking Clyde Edwards-Helaire, who was by-far the worst player in Football Outsider’s BackCAST projection system. The Chiefs will, more than likely, use Edwards-Helaire as a gadget back. He will play out wide, run sweeps, and be their primary outside-zone back out of shotgun. But, if they wanted to maximize value out of a gadget player, a receiver like Laviska Shenault would have been a better bet.

-The Cowboys – however miraculously – walking into the best receiver in the draft in the back-half of the first round. CeeDee Lamb averaged 9.2 yards after the catch (second best in the BFS) and forced 38 missed tackles since 2018 (also second best in the FBS). Amari Cooper, Michael Gallup, Ezekiel Elloit, and Lamb will give Dak Prescott and Mike McCarthy some of the best weapons in the NFL.

The first round is done and it was something of a mixed bag from a fantasy perspective. Some of it was surprising. A lot of it was less so, but let’s dive into some of the key picks from the first round of the NFL draft.

Joe Burrow, QB Bengals – It was no secret that Burrow was going to go first overall. He is the clear 1.01 in superflex dynasty rookie drafts this year. Though I would probably advise passing on him in redraft unless you’re in a 2QB or superflex league. Burrow steps into a pretty good situation. Jonah Williams returning should help the Bengals’ offensive line. They also have a strong WR group with AJ Green, Tyler Boyd, and John Ross. Joe Mixon has the potential to be one of the NFL’s premier workhorse backs. In essence, Burrow has weapons.

Tua Tagovailoa, QB Dolphins – Tua went in the top five in the NFL draft. He is going to get his shot in the NFL. The question here, of course, has never been talent. If you draft Tua, you are gambling that he’s going to stay healthy. That is a tough gamble to make given his extensive injury history. I will know more about where to rank him in dynasty rookie drafts once I see where the top runningbacks get picked. Right now, I will be pushing him down my board a bit solely because of the injury concerns. Without them, he would surely be the 1.02 in superflex formats.

Henry Ruggs, WR Raiders – My main concern with Ruggs has long been whether or not he’ll be a better actual NFL player than fantasy football player. These concerns remain high with this landing spot. To be honest, I think this might be better for Hunter Renfrow than for Ruggs. The field will really open-up for Renfrow in the slot. Given how much Jon Gruden likes Renfrow, it is worth keeping an eye on him as a potential late-round sleeper next year. As for Ruggs, it’s just so difficult for me to know where to rank him. Is he Tyreek Hill? That’s the hope, but I’d probably still take several receivers over him because he’s just such a boom/bust prospect. What makes things trickier is that he could be a totally viable NFL player while being borderline unusable for fantasy due to his weekly volatility.

Justin Herbert, QB Chargers – Draft capital alone has to vault him up fantasy boards, at least in dynasty superflex or 2QB formats. He is going to get his shot as the franchise QB of the Chargers. He’s solidified himself as a top ten dynasty superflex draft pick, and could even go in the top five. I personally find him a bit too risky as a prospect and will likely largely be avoiding him.

Jerry Jeudy, WR Broncos – This is a really interesting landing spot. Courtland Sutton looked to have the makings of a solid fantasy WR last year as he went for 1100 yards and 6 touchdowns. But now he’s going to have to compete for targets with one of the best receivers from the 2020 draft. I think this landing spot absolutely has to hurt Jeudy’s fantasy stock. You’ve got an uncertain quarterback situation. We have no idea if Drew Lock is any good. You have competition in the form of Courtland Sutton. The team also wants to run the ball a lot.

CeeDee Lamb, WR Cowboys – RIP CeeDee Lamb fantasy stock. From a fantasy perspective, this is quite possibly the worst possible landing spot for Lamb. He is going to be competing for targets with Amari Cooper, Michael Gallup, Ezekiel Elliott and Tony Pollard. This one really hurts because I loved Lamb. He might fall to the end of the first round in dynasty rookie drafts now.

Jalen Reagor, WR Eagles – Reagor perhaps sees the biggest bump in fantasy stock in round one of the NFL draft. He is going to a situation with a very murky WR depth chart and should be an immediate contributor. Fantasy owners should probably still take Jerry Jeudy over Reagor right now. Still, there is a legitimate argument to take Reagor over Lamb at this point.

Justin Jefferson, WR Vikings – I honestly don’t know what to make of this pick. Jefferson seems to play a similar role as Adam Thielen. From a fantasy perspective, Denzel Mims would have been a much better fit in Minnesota. That being said, there is a target vacuum in Minnesota with Diggs gone, and Jefferson has one of the highest floors in this year’s draft class. He’ll likely be moving up my board after the draft has concluded.

Brandon Aiyuk, WR 49ers – I am not shocked that the Niners took a receiver. I am dubious that there will be enough targets to go around to make Aiyuk fantasy-relevant any time soon. The 49ers seem to be totally fine with letting Jimmy Garoppolo do as little as possible and I think that Deebo Samuel will continue to be the receiver to own in that offense.

Jordan Love, QB Packers – Wait, what? I honestly have no idea what to make of this pick. It doesn’t seem to make any sense on the surface. Aaron Rodgers is going to make this kid’s life a living hell. I need to see where Jalen Hurts lands before I can solidify my QB rankings. Unless something crazy like a Rodgers trade happens in the near future, Love is going to be the last of the top five QBs in this class. It’s just hard to waste a roster spot on a guy who might not be fantasy relevant for three years.

Clyde Edwards-Helaire – Wow…this was a shocker. The Chiefs had their choice of backs and they went with CEH. This is a huge bump for him in the draft. Though I will obviously need to see where the other backs land tomorrow to know how to properly rank them. Right now, he’s going to at least have an argument for the 1.01 in non-superflex formats.