Making Sense of Mayfield: The Poll 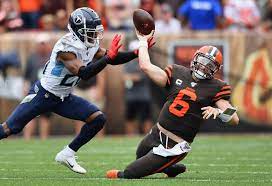 As abundant and plentiful as pumpkin pie spice, Cleveland Browns fans are besieged by bitterness this November. After a 45-7 loss to the Patriots, the Browns dropped a soul-crushing 10-16 loss in Baltimore to the Ravens.

We don’t need an analytical model to explain to us that the offense is not working.

Some Browns fans defend Baker Mayfield in any way possible. Still others refuse to point a finger anywhere else besides his stubbled mug.

This article will explore the extent to which Baker Mayfield is responsible for the stalled offense, and explore the most popular topic in Cleveland: What happens next at quarterback?

The Control Group: So Much Stays the Same

Monday morning quarterbacks explored all the possible problems plaguing the Browns offense. For over a calendar year, Browns fans poured over statistical analysis over whether Odell Beckham Jr’s route-running caused the passing offense to sputter or Baker Mayfield’s accuracy. With the dismissal of Beckham, the dialogue needed to change.

Some have pointed fingers to a lack of talent surrounding Baker Mayfield. Others are focused on the play-calling of Kevin Stefanski. Some still claim a struggling defense or special teams cause the offense to stagnate. What has changed so much in 2021 if so much stayed the exact same from 2020?

Football Outsiders tracks defense-adjusted value over average, attempting to eliminate the strength of the opponent in measuring the success and failures of a defense or offense.

Last year, the Browns were 3rd in rush yards per game, racked up 24th in pass yards per game, achieved 9th in offensive DVOA, totaled 30th in 4th down conversion percentage and 4th best in giveaways. That is a lot to take in, but the team basically was efficient in multiple measures aside from converting on 4th down and passing offense.

This year they’re 3rd in rush yards per game and racked up 25th in pass yards per game. So there isn’t a big change. They stand 12th in offensive DVOA, 26th in 4th down conversion percentage and 5th in best giveaways per game.

So in all of these measures, the Browns offense is much the same as they were one year ago. The change occurs in facing more difficult opponents… and the passing of Baker Mayfield.

The Butcher, The Baker, and The Bad QB Enabler

This DVOA measure can isolate one big change from the 2020 season to this one. The quarterback has failed to provide added value to the offense. Much credit goes to long-time RCF member Luka Papalko for pointing me to an analysis called EPA.

Next Gen Stats creates a statistic called EPA, or expected points added. This EPA takes each individual play situation and eliminates issues not in the quarterback’s control such as penalties or fumbles after the pass is completed. The Browns drop back passing EPA has dropped from 7th last year to 22nd overall this year while maintaining a similar pass rate and similar run game effectiveness.

What does all this mean? Yes, we can find instances of the surrounding play makers, the offensive tackles, or even the coaching staff having a rough series of plays. Of course they contribute to the offense stalling out.

None of that changes the fact Baker has been the single biggest fluctuation in performance from 2020 to 2021.

Everybody Besides Andrew Berry – Pretend Your Opinion Counts!

Andrew Berry was recently quoted saying Baker Mayfield is the Browns QB and “He is healthy enough to win games for us.” He called Baker “Physically and mentally resilient.” It sounds as if the Browns GM is not looking into a change at quarterback too closely anytime soon.

This follows logic, because making dramatic changes mid-season at quarterback is not a recipe for success. Case Keenum is a veteran backup, and has never been mistaken for a young Kurt Warner.

In a bye week, let’s stop bothering with the cold hard reality that the season is in Baker’s hands and look forward to next season. What would you like to see the Browns do in the offseason? This article is attached to a poll on Real Browns Fans.

What do you anticipate the Browns to do about Baker Mayfield and the quarterback position next spring? How can the fanbase escape being delimited my discontent watching the Browns offense in 2022?

Vote and make a compelling argument.

Follow all the Real Browns Fans articles and podcasts coming this season, along with Twitter announcements on @realbrownsfans, @real_BrownsFans, and @Realcavsfans. Go Browns!