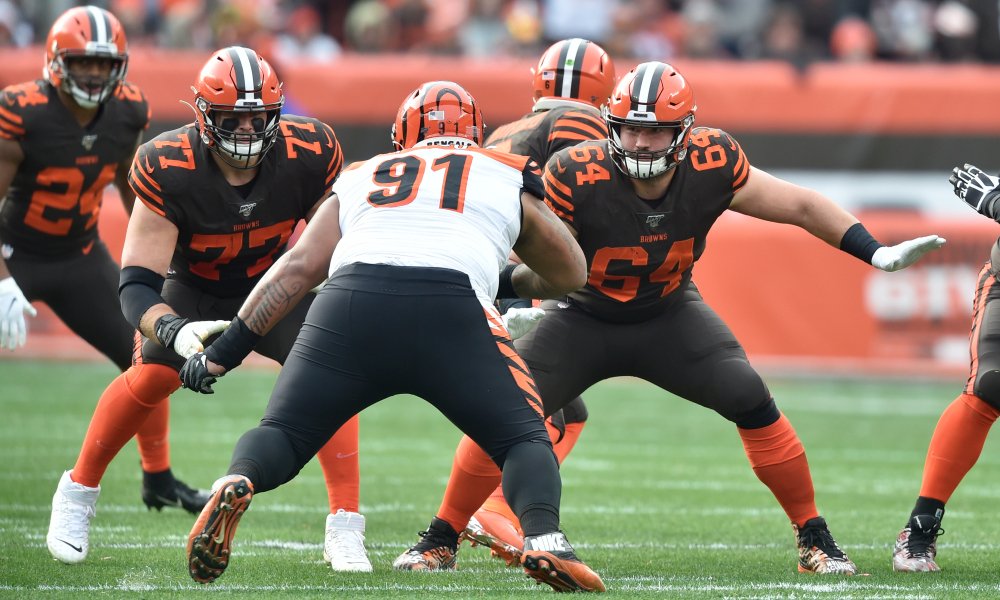 The Cleveland Browns have a winning record. We can all say that for the first time since The Guardians of The Galaxy was a big deal. In a position preview a few weeks ago, RBF mentioned that this could be the best offensive line in talent and coaching since 2014.

Week three was supposed to be the litmus test for this offensive line. Rookie Chase Young was tied with TJ Watt for the league lead in sacks with 2.5, and the Washington defense led the league in team sacks with 11. With rookie Jedrick Wills facing off against the front-runner for NFL Rookie of the Year, Young and his additional two quarterback hits, two tackles for a loss, and one forced fumble loomed large. Even when Young left with an injury, he was replaced by Ryan Kerrigan. All Kerrigan has bothered doing on the past decade is go to four Pro Bowls and post Pro Football Focus grades of over 80.0 in 5 of his first 7 seasons. This defensive front seven provides a formidable challenge.

“Just follow the guards… they will take you to The Promised Land.” – Brian Baldinger

That is what the former NFL offensive lineman and current analyst for NFL.com had to say about the run blocking from Joel Bitonio and Wyatt Teller against the Washington Football Team Established in 1932. Both Browns guards pulled to the outside with power and exploded into the second level of the Washington defense all Sunday afternoon, wearing the opponent down by the second half.

Nobody should be surprised that the Pro Bowl level Bitonio is graded highly by analysts, but Teller has gained 16 pounds of lean muscle since last season, and looks like a different player. Starting center J.C. Tretter recovered from a minor knee procedure in the spring, and was not a fixture in practices until the final week of preseason.

Pro Football Focus is a website that grades the performance of a player on a scale of 0-100. A score in the 70s is a solid starter, a score in the 80s is an exceptional starter who may be on the way to the Pro Bowl, a score in the 90s should be remembered for a very long time after he retires. Here are the Browns line scores through week 3:

After a rough 2019, all initial questions about the interior line have been answered with authority. Bitonio has surrendered one sack, but through three games neither Teller or Tretter have given up a sack on the quarterback. Pass rush from this exact same trio in 2019 gave Baker Mayfield “the yips” stepping up into the pocket. With the incredible performance so far from the interior, Mayfield is becoming more comfortable stepping up in the pocket instead of rolling towards the sidelines, limiting his receiving options.

Due in large part to the excellent performance of the offensive line through three games, the Browns rank 3rd in rushing yards and 4th in yards per carry in the NFL. While the yardage from passing is still a work in progress, the line can boast of ranking tied for 6th place in fewest sacks allowed. After a disappointing 2019, this is as good as anyone could have hoped.

As Browns fans, we have all been conditioned to wait for the other shoe to drop. Something has to go wrong eventually. Let’s look at areas for some minor concern going forward.

A quick glance at the Pro Football Focus grades show Wills as the weak link so far. If a football fan is seeking punishment, one could look up the higher PFF grades for Mekhi Becton at 76.9 for the Jets or Tristan Wirfs at 73.9 for the Buccaneers. Both were selected after Wills in the 2020 NFL draft. Incidentally, the only tackle drafted ahead of Andrew Thomas of the New York Giants, is off to a rough start as a left tackle scoring a grade of 55.5 due to poor run blocking.

There are reasons for relatively high grades so far forBecton and Wirfs. Becton is left tackle on a brutal New York Jets offensive line, who only has one other productive linemen in left guard Alex Lewis. The free agent center, Connor McGovern, has been a complete bust while to right side features two journeymen as starters. Why would an opposing defensive coordinator challenge the left side when the right has struggled so badly?

All season, Wirfs has the advantage of playing right tackle for a right handed quarterback. Tom Brady is protected on his blind side by a solid veteran in Donovan Smith and other expensive veterans on the interior. Because teams put run stoppers at left defensive end and typically line up their premiere pass rusher on the right, Wirfs is breaking into the NFL with less one on one challenges in pass protection.

What if injuries hit?

Thinking back to that great zone blocking scheme grouping back in 2014, they rarely allowed pressure on quarterback Brian Hoyer and open huge holes for running backs until Alex Mack broke his ankle near the end of week 5. From that point on, despite nearly Pro Bowl level play from the guards and tackles, the backup center became the weakest point for an opponent to exploit. Is there a chance that could happen this season?

Luckily, the offensive line depth this season is much better than 2014. The Browns already lost prized free agent right tackle Jack Conklin to a sprained ankle in week 2. Former right tackle Chris Hubbard stepped into his old role and played his best football as a member of the organization, with PFF scoring his 58 snaps at 73.8. Hubbard is expected to cover a “sixth man” role for the offensive line to any injury that occurs to a tackle or guard. This is the same role he thrived in for the Pittsburgh Steelers before signing with the Browns. Fifth round pick Nick Harris also spent the entire training camp and preseason stepping in for the injured JC Tretter.

So can multiple injuries cripple this exciting 2020 season of the offensive line? It is possible, but the front office seems to have prepared for injuries better than any front office in recent memory. Unclench your sphincter, Browns Backers, this might just be the best Orange and Brown offensive line you have seen in your lifetime.