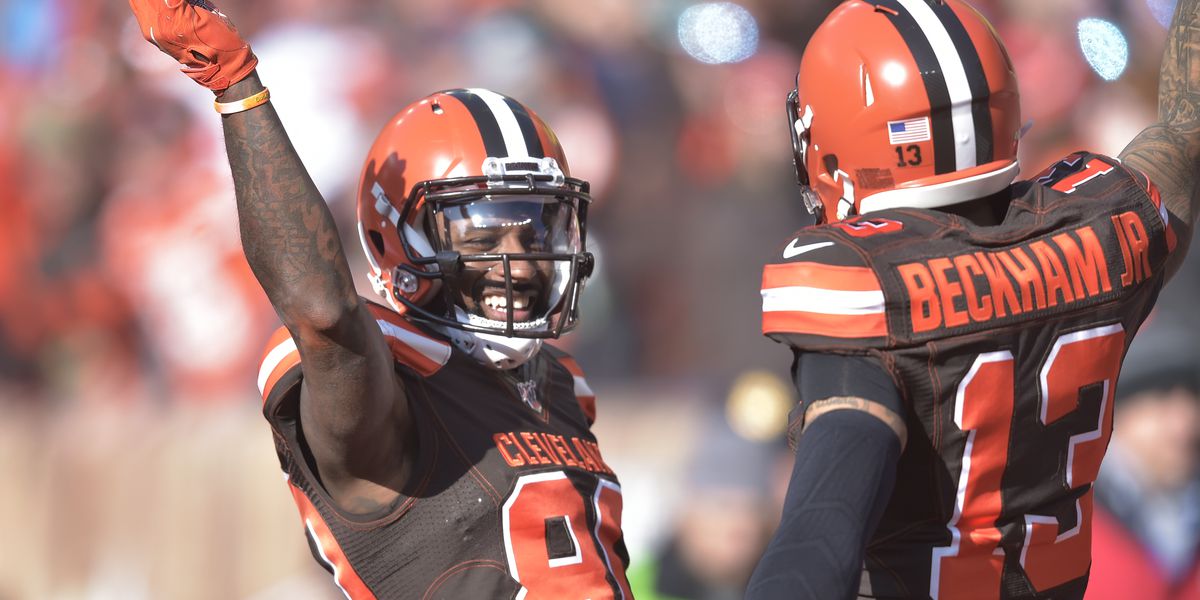 Let’s take a step back in time and recall Kyle Shanahan’s tenure as Browns offensive coordinator. Shanahan coached in Cleveland long before he took the Falcons and 49ers offenses to the doorstep of a championship. Ray Agnew played fullback behind a zone blocking scheme, Jim Dray and Gary Barnidge split second tight end action behind Jordan Cameron, and there were still snaps available for backup receivers like Tylor Gabriel and Travis Benjamin. Most glorious of all: The Browns won almost half of their games.

Since that time, Browns offensive coordinators have mostly used the “11 personnel” as their base offensive set: Three receivers, one tight end, and a running back. In 2020 the Browns will finally return to the more diverse personnel groupings of the Shanahan offense. Receivers will have an important role in Kevin Stefanski’s scheme, but backup receivers will each bring a unique dynamic to the team outside of simply running routes and catching balls.

The Giants traded Odell Beckham Jr. to the Browns in large part due to his lifelong friendship with Jarvis Landry. Beckham made the Pro Bowl from 2014 through 2016, but injuries and personality clashes created a toxic relationship with the Giants organization. Landry had enjoyed Pro Bowl seasons his second season in the NFL back in 2015, and believed the two former LSU stars could reunite to become the best starting receiver duo in football.

So little in the Browns 2019 season went according to plan, But the starting receivers provided plenty of excitement all season long. Focusing on the positives, Beckham surpassed 1,000 yards receiving and Landry returned to the Pro Bowl. They combined for over 2,000 yards, nearly 160 receptions, and 10 touchdowns. Both Beckham and Landry played through injuries which required offseason surgery, but managed to prove they are indeed one of the best one-two punches in the NFL at the receiver position.

“I love going against Odell, someone who’s going to compete, and he’s going to get me ready for the games. We have a lot of conversations. I told him he’s going to be one of the reasons my game goes to the next level.”

Examining the efficiency of their receiving numbers tells a darker story. Catch ratio is the number of receptions divided by targets. Beckham’s catch ratio fell to the lowest of his career from 62.1% to 55.6%. Jarvis Landry improved from the previous season, but after posting a catch ratio at or near 70% in Miami, his percentages have fallen off to 54.4% in 2019 and 60.1% in Cleveland.

The starters carry high expectations for these brothers from another mother. Coaching decisions and a bad year from Baker all played a part in 2019 being a let down. To live up to expectations, turning more targets into receptions will deliver the Browns a lethal passing attack.

Hollywood and Life in the Fast Lane

The reserves behind Beckham and Landry each provide a unique set of skills. 25 year old KhaDarel Hodge seems to have taken the role of third receiver in a fairy tale start to his career. The former Black College All-American made the Rams as a street free agent after a tryout. His athleticism at 6’2 and 205 is off the charts, allowing him to carve a role as gunner on special teams. Hodge was timed at an unofficial 4.39 40-yard dash, a 38 ½” vertical jump, and 15 bench press reps of 225 pounds. After joining the Browns, he was able to get some time as a receiver as well as special teams ace, picking up the first start of his NFL career. His ability to push the top off the defense gives possession routes and tight ends more space to get open.

25 year old Rashard Higgins is nicknamed “Hollywood” because his Pee Wee League football coach thought he acted like a star. His professional career has often mirrored the roller coaster filmography of John Travolta. First he was a day three draft pick in 2016, and remains the only survivor of that group of receivers drafted by the Browns. Next he was on and off the active roster for two seasons. Suddenly, the possession receiver became Baker Mayfield’s most reliable target in the 2018 season, catching almost 74% of his targets and picking up 27 first downs. Last year he found himself in Freddie Kitchens’ dog house, unable to take snaps away from Kareem Hunt as the third receiving option. Higgins signed late with the Browns in hopes of rekindling what he started in 2018.

Natson is the all-time leader in punt returns for touchdowns in the Mountain West Conference, despite being dismissed from the Utah State program and finishing his career at the University of Akron. Only listen at 5’7 and 152 pounds, Natson is a blur with elite quickness who can also become a weapon on jet sweeps.

DPJ was selected in the sixth round despite being a five star recruit out of high school and a physical prototype for an NFL receiver. While his college production would not immediately correlate to a prospect deserving of playing time on an NFL field, DPJ often found himself creating separation from defensive backs in vertical routes, only to see poor quarterback play hold him back. His fit as a fourth wide receiver on the Browns roster also aligns with how receivers had been utilized with the Vikings. He can stretch the field vertically to create space in underneath routes.

This concludes the Browns positional breakdowns for Real Browns Fans. As OBJ learned, words only go so far. It is time for less bark, and more bite.