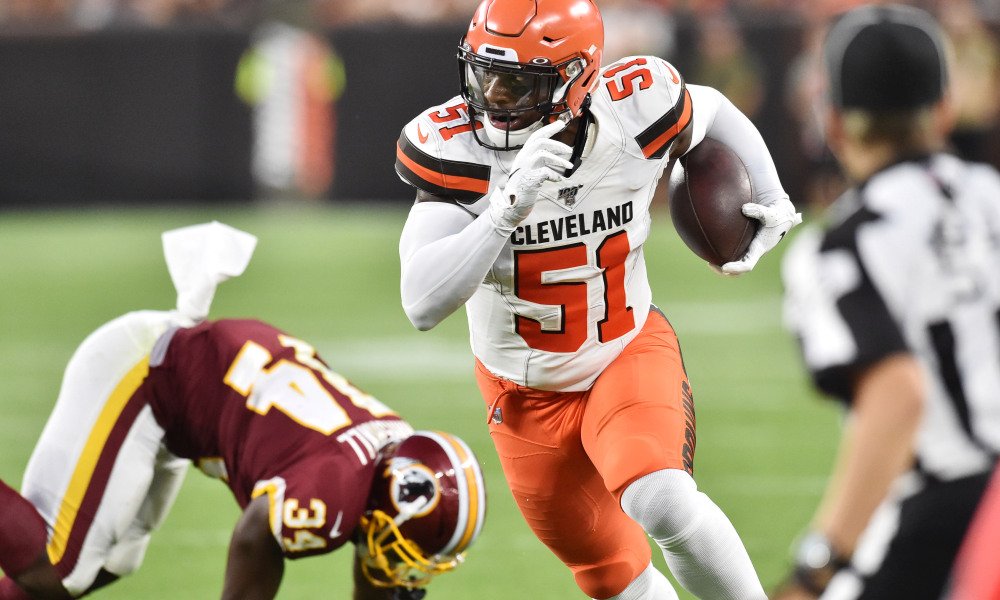 What is one decision that Andrew Berry and Co. didn’t make this offseason, that you would’ve made?

Red McClane – I think the Browns should’ve made more of an effort to sign Joe Schobert. Looking at the linebackers that are currently on the roster, I think it’s the weakest position. Schobert signed with Jacksonville for a little under $11 mil per year. For a player of his caliber, that is a fair value contract. Instead, the Browns will turn to Sione Takitaki and BJ Goodson. Mack Wilson returns as your WILL linebacker. On paper, that is an uphill battle and has me worried headed into the 2020 season.

Matt Cohen – I will admit I’ve been a pretty big fan of the front office’s moves so far this offseason. While the additions of Conklin and Wills were A+ moves in my book, there is still a GAPING whole at RG. Wyatt Teller is slated first on the depth chart as of today. From PFF: Right guard Wyatt Teller allowed 16 quarterback pressures in just 11 games and posted a run-blocking grade of 48.2 for an overall grade of 56.7. That is not good enough and needs to be addressed.

Andrew Lars Schaffer – Would it be cheating if I said sign Jadeveon Clowney, since it might technically still happen? I’m going to give two things I would have liked to see–and they have some overlap.

First, I would have liked to see us address the right guard spot along the offensive line. I feel the offensive line is actually an area of increasing returns–that is to say, having more good players actually gives you more impact from each player. We have one hole, and it would have been nice to address it rather than rely on the wealth of depth we have available.

The second is that I would have liked to see us be more aggressive with acquiring picks in this draft. Whether that was by trading veteran talent or by trading future picks. I think the COVID crisis gave this draft a unique value proposition that doesn’t usually happen. If you were willing to gamble on medicals, you had Bryce Hall go at pick 158 and Netane Muti go at 181. If you were willing to gamble on smaller school players you might not be able to get as much in-person time with. Cassh Maluia at 204 and Antonio Gandy-Golden at 142 stand out as exceptional value to me.

The overlap is because we easily could have addressed guard with additional picks. From 121 through 150, Logan Stenberg, Kevin Dotson, Ben Bredeson and Shane Lemieux all went off the board. I think they all are better than the veterans we have available to rotate through at RG. Let’s hope Drew Forbes impresses.

Ben Roethlisberger is 38 and coming off a major injury to his throwing elbow. Are you worried that he is able to come back and make an impact for the Steelers in 2020?

Red McClane – Father time is undefeated expect when it comes to Tom Brady and Lebron James. Ben Roethlisberger is neither of those two, so I lean towards father time winning this battle. Going under the knife on your throwing elbow at 38 is not ideal for a team trying to compete for a Super Bowl. Entering year 16, Ben has two major weapons to help him ease back into it, James Connor and Juju Smith-Schuster. Playing in the AFC North won’t make his comeback any easier. I don’t see a Pro Bowl this year, I see a struggle for the aging QB.

Matt Cohen – Seems like forever ago many of us wanted to draft Ben to take over for a 34 year old Jeff Garcia. Instead they drafted Kellen “The Soldier” Winslow. Yikes. The sun is setting on Bens NFL career, but he has proven he can come back from injuries and be effective. In 2018 he finished 4th in total QBR. He has some nice weapons in James Connor, Smith-Schuster, Dionte Johnson, Eric Ebron, and rookie Chase Claypool. I would expect him to finish in the top 10-12 range for quarterbacks this season, assuming health.

Andrew Lars Schaffer – I think he’ll return to form, but his numbers will certainly go down without Antonio Brown in the mix. I love the Chase Claypool pick. He’s a talented, fast, big-bodied WR that should give Browns DB’s fits for years to come. However, you can’t replace Antonio Brown’s production.

Hue Jackson came out and said he wanted to sign Colin Kapernick in 2017, but the team wanted to go in another direction. Flashback to 2017, Hue said that “Kapernick hasn’t been discussed”.

We all know that the Hue Jackson experiment was a complete disaster. Hue has been known to “stretch the truth” with his comments over the years. What is your favorite Hue Jackson story during his time with the Browns?

Red McClane – Where to start, really? Let’s take it back to the very beginning with Robert Griffin III. Hue Jackson was the hottest coaching candidate in 2016 and we somehow landed him. He won us over in the press conference and we thought we were on our way to greener pastures. Hue needed to find his QB of the future and he landed on RG3. In 2015 with the Redskins, Griffin didn’t take a snap at QB and was released in the offseason. Hue attended the workout of the former Heisman trophy winner and dropped the first of many gems to come out his mouth, “It felt like the earth moved beneath my feet”.

Hearing that at first, is it possible RG3 did have something left in the tank that the Redskins didn’t see? In the 2016 opener, we were gifted with Griffin injuring his shoulder and being placed on the IR. He finished the season starting 5 games, throwing for 886 yards, 2 TDs, 3 INTs and was released in the offseason.

Matt Cohen – My favorite Hue Jackson story is easily the Hard Knocks scene between him and Todd Haley. Haley wants less players resting, and Hue doesn’t. It’s this short scene that told me everything I needed to know about Hue. He was not open to differing opinions, and was quick to use his title as head coach to steam-roll his staff. Honorable mentions were the lines “Trust me on Cody Kessler” and “If I’m worth my salt as a coach, I’ll get the most out of Deshone Kizer.”

Andrew Lars Schaffer – My favorite Hue Jackson story was the one with the hookers and blow in the Arby’s bathroom. Oh, that never happened? Well then it fits right in with most of the made-up Hue Jackson hindsight claims.