Our writers look back at the challenges in the cold and muck of FirstEnergy Stadium against the Houston Texans, and look forward to more muck against the Philadelphia Eagles. 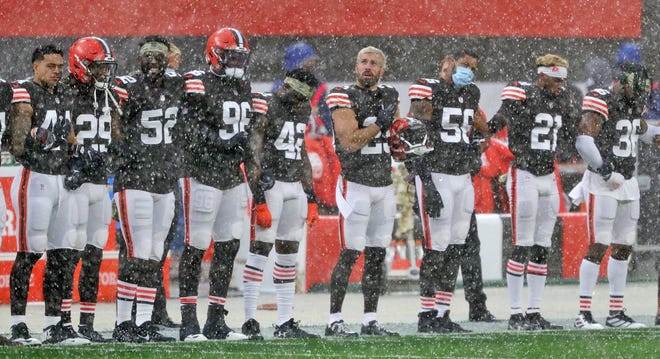 1) Over 64% of their total offensive plays were rushes in Week 10 — the second-highest rate in a single game by any team this season. Is this the formula for winning or a product of the weather?

Ohio: More so the weather. Stefanski spoke pretty bluntly about this in his postgame presser – it was near impossible to throw the ball for much of the game. This is not a formula for winning – unless the Browns continue to play in bad weather games like these.

Q: It’s a product of the weather.

Chris Richani: It’s a little bit of both. On the surface this seems like a weather-driven strategy. Stefanski even said so himself in postgame interviews. On the other hand, a potential criticism of Stefanski as a playcaller coming into the season was a tendency to get overly conservative and stay overly loyal to the run game. This was the first game this season where I felt like Stefanski was too run heavy, and it could have cost the Browns. Fortunately Chubb and Hunt’s excellence paired with a huge 3rd and 18 completion from Baker to Higgins saved the day. It is definitely something to watch going forward.

2) The offensive line had their best game in several weeks against the Texans. Is this a sign of things to come, or are the Texans crappy?

Chris Richani: This is Cleveland’s identity, and this is what I expect from the Browns offensive line. The Texans defensive line is not overly intimidating outside of Watt, but the success of the OL this week was more of a product of getting Wyatt Teller back into the fold and regaining that early season magic. The run game was successful despite the Texans stacking the box for the majority of the day. In passing sets the OL held off Houston’s pass rush admirably while Baker did a great job navigating the pocket. The Browns will go as their offensive line goes, and Sunday’s game was a promising sign that they are back on track.

Q: It’s a sign that Teller came back. He’s been arguably one of the best offensive linemen in football this year, and getting him back really helps. Also…

Ohio: It’s a sign of things to come, and a reminder of how well the line was playing before Teller’s injury. His impact to the the line and the team as a whole cannot be overlooked, especially in the running game, where the Browns have been significantly better with Teller on the field.

3) The Ravens are officially struggling, the Titans lost 3 of their last 4 after a dominant start to the year, Big Ben looked shaky until a get right game against the Bengals. What do the Browns need to do the rest of the season?

Ohio: Keep playing their game, continue winning the games they should win and let the chips fall where they may. The Browns should not be concerned with anyone but themselves. If they take care of their business, they will be in great shape.

Q: The Browns need to win football games and make the playoffs, setting up a winning culture and something to grow on for next year. From a non-results standpoint, I want to see coaching continue to work with and develop Baker Mayfield. We’ve seen his pocket presence improve by leaps and bounds. Let’s get him comfortable with his feet and back to delivering the ball with elite accuracy.

Chris Richani: No one in the AFC outside of Kansas City and Pittsburgh looks particularly sharp these days. The Browns could have really seized control of their destiny with a win over Oakland, but they are still in good shape nonetheless. The best thing they can do at this point is take care of their own business and not worry about the standings. The Browns will be favored in 4 of their last 7 games. The other 3 come against the struggling Titans, the regressed Ravens, and a Steelers team potentially resting starters in Week 17. Take care of business, and let the chips fall where they may. The Browns will be playing very meaningful football in December; enjoy it.

Breaking – Jack Conklin, Chris Hubbard, Charlie Hughlett, and Cody Parkey are in Covid protocol. How will the outbreak of Covid-19 exposure change your expectations of the Browns performance Sunday?

Q: If both Conklin and Hubbard are out, I believe this sets Lamm up to start at RT. That’s a massive drop-off, and I’d expect us to eliminate a lot of deep drops and long-developing route trees from our arsenal to compensate. Stick to your strengths–run the ball, quick hitters before Lamm’s guy gets to Baker. If we do take shots downfield, I expect Baker to be out of the shotgun where he can see Lamm getting beat in front of him.

Chris Richani: If the affected players cannot play Sunday it will certainly present a challenge for the Browns, but it should not be enough to tip the scales in the Eagles’ favor. It is worth noting that these players represent two important position groups, especially in another game with potential weather considerations. In another rainy contest the Browns will again look to their offensive line to deliver in the run game. And with regards to the kicking game, Cody Parkey has delivered in his limited opportunities in back to back bad weather games. Losing him may be an underrated loss or even potentially encourage Kevin Stefanski to be more aggressive with 4th downs or 2 point conversions.