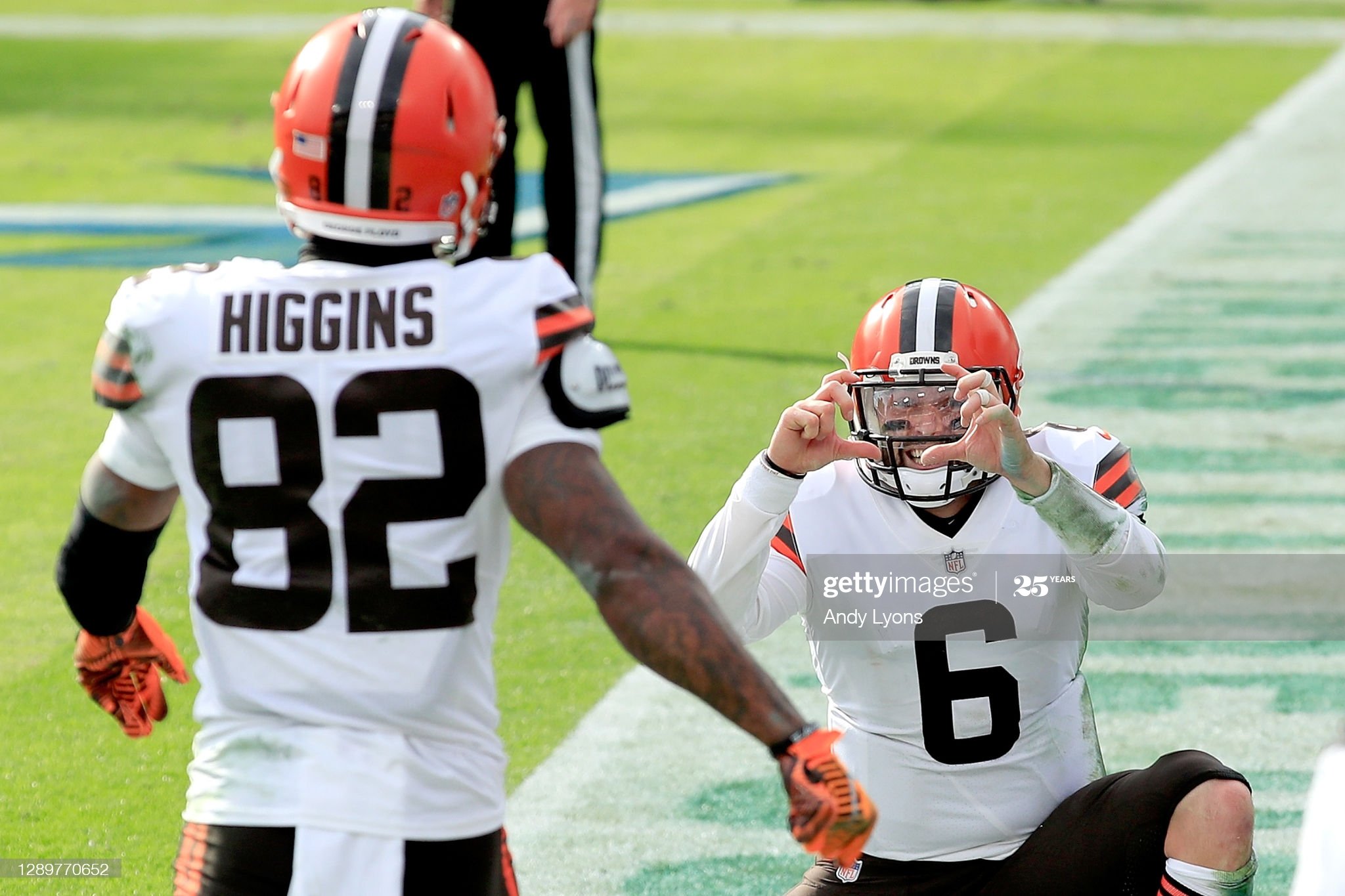 NASHVILLE, TENNESSEE - DECEMBER 06: Rashard Higgins #82 of the Cleveland Browns celebrates with quarterback Baker Mayfield #6 after catching a pass for a touchdown against the Tennessee Titans in the second quarter at Nissan Stadium on December 06, 2020 in Nashville, Tennessee. (Photo by Andy Lyons/Getty Images)

The Cleveland Browns are going to the playoffs.

Read that, soak it in. For the first time since 2002, the Cleveland Browns will have a December to Remember. Except this time, the squad is ready to blow open the door and make noise. With a 41-35 win over the Titans Sunday, the Browns hold the tie breaker over every wild card contender except the Raiders and Ravens, whom are behind the Browns in the race to the playoffs.

Perhaps most importantly and shockingly, the next Browns game is perhaps the biggest since the playoff game in 2002. Not only can the Browns virtually seal their playoff run officially, they can eliminate the Baltimore Ravens from the playoffs.

I’ll repeat it, for any of the non-believers amongst us. The Cleveland Browns can eliminate the Baltimore Ravens from the playoffs.

About midway through the year, there were some real questions about what Baker Mayfield was going to be in the NFL. Was he the franchise QB that could end all the streaks of futility the Browns have? Or is he just another in a long list of failed QBs the Browns have had over several years of bad football?

Special shout outs to Donovan Peoples-Jones and Rashard Higgins, who have stepped up in the absence of Odell Beckham Jr and have made the Browns passing attack deadly and efficient. While Jarvis Landry is allowed to be his usual solid self, Higgins and Peoples-Jones have provided stead and big play ability, with Higgins showing to be a real threat to the defense.

Joe Woods has taken a lot of hits for his personnel for his defense due to injury. Not only that, but losing his best player to COVID for two weeks and clearly was at 3/4ths speed all day. However, the team has started to pickup for it’s lost parts and has put together some solid defense for the Browns.

No one would argue that the Browns are going to replace the Steelers anytime soon. But forcing turnovers and playing bend but don’t break defense allow the Browns to jump out to a huge lead in the first half that allowed them to see the game through to the end. Players that most would write off as either average or not good enough have started making plays while the playmakers have been down.

Guys like BJ Goodson, Malcolm Smith, and Sheldon Richardson really stepped up in this game. Smith had a sack and played a generally great game of football, which Richardson forced a key fumble in the first half vs Derrick Henry. Even BJ Goodson, who has shown that he can be a leader for this defense, made a key two point conversion stop against the hulking running back, Derrick Henry.

If and when the Browns do get Denzel Ward, Ronnie Harrison and Myles Garrett up to full speed, the defense could become good enough for the Browns to make a real run in the playoffs this year.