Two homegrown linebackers in their prime left the Browns, yet somehow the outcome helped the defense grow. 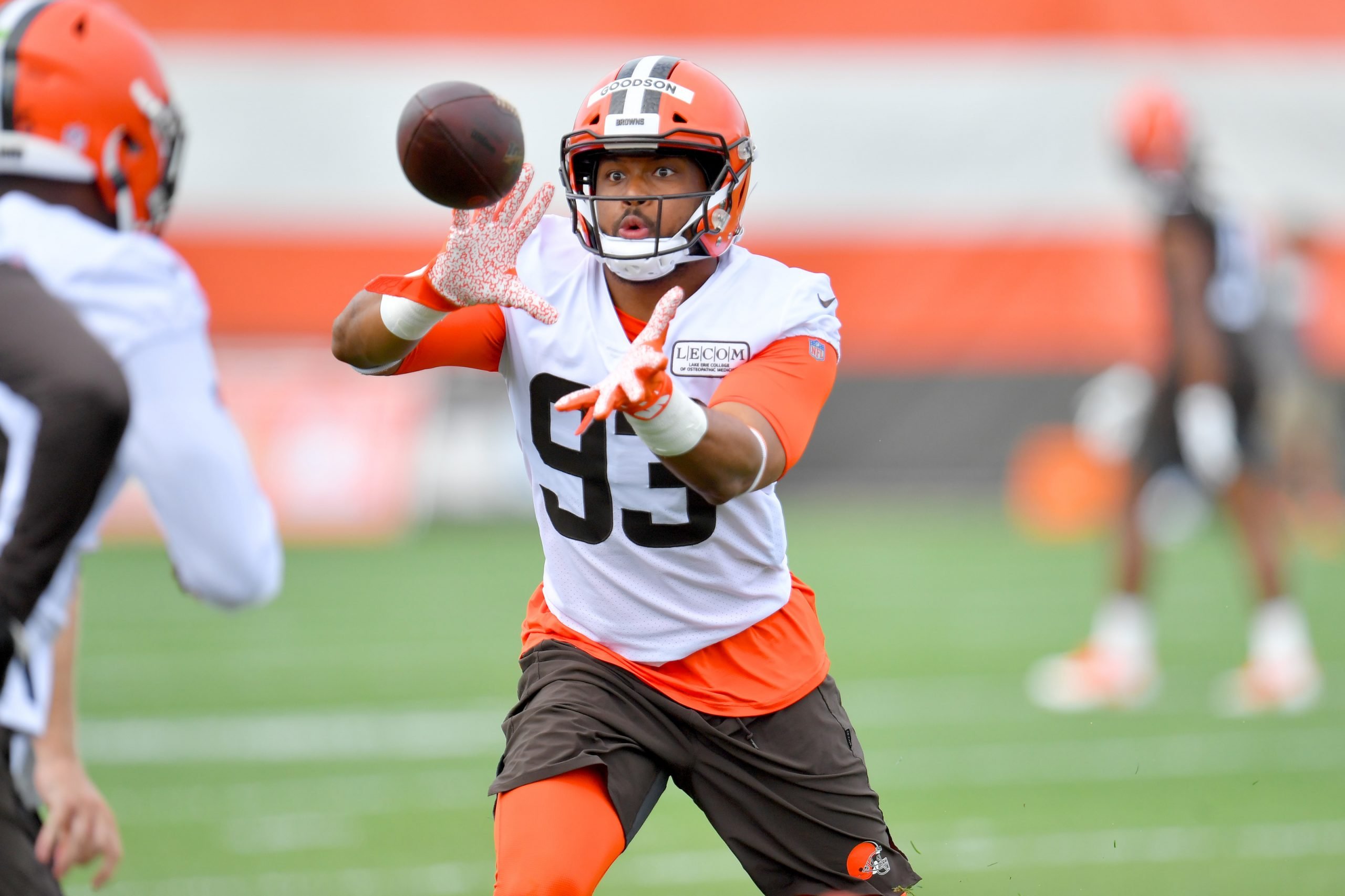 The Browns are currently 9-3 and headed to the first franchise postseason appearance in eighteen years. Ownership certainly hoped the first year front office and first year coaching staff could steer the talented roster in a winning direction one year ago, but… this is the Cleveland Browns.

Optimism of training camp usually ends in a kismet of misfortune. This article examines how the position group that made Browns fans most nervous – the linebacker room – transformed from a pending disaster to a rapidly improving stroke of luck.

In my lifetime of being a Browns fan, I have never looked forward to the start of NFL free agency. In the 1980s and 1990s, it was very difficult for talented players to leave a franchise. By the time the Browns returned to the NFL in 1999, the players union had loosened the control franchises could exert over talent that wanted to leave for another glamor franchise in warmer weather with a tradition of winning. The Browns free agency plan resembled seagull management.

What do seagulls do? They show up in a huge flock, flapping their wings and squawking, shitting all over the place… and then they leave.

The agents of Browns unrestricted free agents often acted the same way: They would show up in Berea making a lot of noise. The Browns front office would try to navigate the different desires the best they could, but usually it all ended with overpaying a player to stay or losing the player to another destination. The Browns would then begin the process of cleaning up the aftermath, filling roster holes and juggling contracts.

Before Andrew Berry re-joined the Browns franchise as General Manager, a plan seemed to be in place. The Browns invested some mid-round linebacker talent knowing their starters, Pro Bowler Joe Schobert and defensive team captain Christian Kirksey, were in a position to negotiate with other franchises for the first time. After missing 9 games in 2018 and 14 games in 2019, the franchise and 28 year old Kirksey seemed destined to mutually part ways.

2019 fifth round pick, Mack Wilson and 2019 third rounder, Sione Takitaki gained valuable game experience in 2019. Neither produced at a starting level as rookies according to Pro Football Focus. Browns fans wanted to believe Mack Wilson could make strides to improve, however his questionable run support caused some cringe-worthy moments in 2019. Poor tackling angles in college pushed him into the third day of the draft.

The press reported 26 year old Joe Schobert was willing to negotiate an extension, however rumors placed his asking price at 10 million per year. This would place him among the top six linebackers in the NFL. Schobert made Pro Bowls as a talented zone pass defender and willing tackler, but a player who missed too many tackles and could be dragged for extra yards.

Andrew Berry and the Browns front office chose to let Schobert sign for a Pro Bowl level contract with the Jacksonville Jaguars. Additionally, they opened the door for Kirksey to sign a 2 year 13 million dollar contract with the Green Bay Packers.

The Jaguars stand at a 1-11 record with a ten game losing streak. Schobert currently has a 53.3 overall grade from Pro Football Focus. This below average grade has been earned through a high tackle total at 74 tackles and 25 assists, but continued missed tackles and lost yards in run support. His cap hit for 2020 is 9.9 million cap hit. His guaranteed money assure that he will be a Jaguar for at least the next two seasons. If cut in 2022, Schobert would still be a 4.5 million cap hit.

While the Green Bay Packers have positioned themselves as Super Bowl contenders, Christian Kirksey hasn’t been a part of that rise. Kirksey is among the lowest rated linebackers in the NFL at 40.0 overall, landing on the IR six games into the season. He is an 8 million dollar cap hit and prevents the team from improving the defense into next year. He will most likely become 2 million in dead money on the 2021 salary cap after getting cut.

Young Bucks and the Bargain Bin

The Browns hoped second year linebackers Mack Wilson and Sione Takitaki would step up in their second year of NFL play, but the front office wisely created a cost effective backup plan.

The primary signing to replace the veteran linebackers was former Green Bay Packer B.J. Goodson. A fifth year veteran, BJ Goodson is now on his third team. He previously played for the Giants where his pass defense received positive ratings despite a small sample size. With the Packers, Goodson was mostly used on running downs and started 9 games, but never played in more than 50% of snaps. The Browns know Mike Pettine’s system well from his stint as Browns head coach, and knew that his system expects linebackers to make very difficult pre-snap recognitions. The Browns gambled he would rebound well in a more standard role with a mostly guaranteed 2.4 million one year contract.

At the end of training camp, the Browns also added 31 year old veteran Malcolm Smith. At the time, the consensus for Smith’s career is best categorized as over the hill. After a productive run as the primary backup linebacker for The Legion of Boom in 2012-2014, Smith suffered multiple injuries for the following half decade, losing his spot on the 49ers roster to future Browns waiver wire add Elijah Lee. Luckily, Smith seemed to be his most healthy self, with more agility in pass defense than he had shown in a few seasons. He signed for one season at a little over one million dollars.

After starting the season with Wilson sidelined, the veterans Goodson and Smith steadily established themselves as a legitimate starting linebacker unit.

Goodson leads the team in total snaps at linebacker so far because he is durable, communicates well, and elevated his mental processing against the pass. Goodson currently holds a 64.9 PFF rating due to in part to three quarterback hits, six passes defensed, and two interceptions on the season so far. His perceived weakness in passing situations no longer holding the hard hitter back.

Smith passed Takitaki into a higher snap count, showing that he is no longer a step too slow in run support and pass defense as well. Smith leads the linebackers with a 71.8 rating on PFF, holding opposing passers to a rating of 81.8 when targeted with two passes defensed and an interception. Most importantly, Smith turned back the clock with only four missed tackles so far on the season after struggling in change of direction situations the past few seasons.

Wilson and Takitaki still rotate into the front seven in more of a support role. Wilson has cut his opposing passer rating back to 85.4, over eight points lower than his rookie year. Takitaki has become a run situation specialist, seeing an uptick in snaps during the stretch of inclement FirstEnergy Stadium weather. His interception against the Eagles pushed the momentum of the game into the Browns hands to seal a home win.

The Browns also have high hopes for 2020 3rd round draft pick Jacob Phillips out of LSU long-term. Phillips was a tackling machine for the Tiger defense in 2019. He led the SEC in total tackles, 113 and added 7.5 tackles for loss. Not much of a pass rusher, producing 1 sack in 2019, he has the length to eventually become a force defending tight ends. Fighting off some nagging injuries, Phillips should see an increase in snaps at the end of the regular season.

The end result is the Browns most likely enjoying better linebacker play than they likely would have enjoyed if they retained their starting group from the past few seasons. While the Jaguars and Packers must figure out how to improve their defense with huge cap hits from Schobert and Kirksey, the Browns found starting level veteran players in the bargain bin. Goodson and Smith won’t make the Pro Bowl, but they allow the young linebackers to ease into a larger role in the future without surrendering lost opportunities to their learning curve.