The Browns’ Performance Through Week 2, Baker Mayfield, And Analytics

There has been an ongoing theme since the Browns’ drafted Baker Mayfield: we are “done with the Browns” after Week 1 and “possibly going to the playoffs” after Week 2. The reality this year – just like last year and the year prior – is somewhere in between these two worlds. Below are some thoughts. 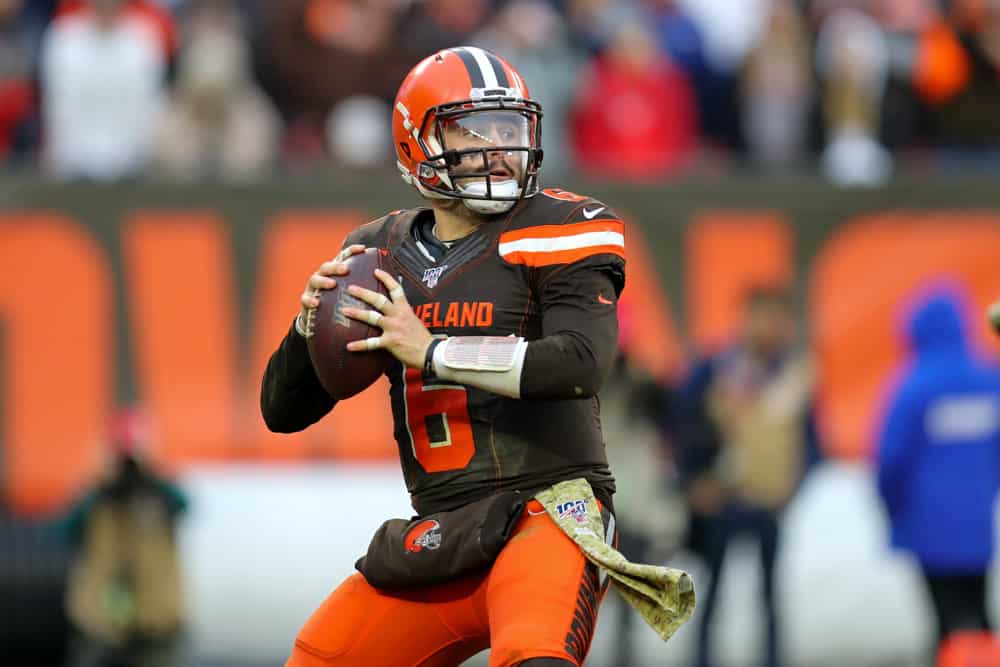 There has been an ongoing theme since the Browns’ drafted Baker Mayfield: fans are “done with the Browns” after Week 1 and “possibly going to the playoffs” after Week 2. The reality this year – just like last year and the year prior – is somewhere in between these two worlds. Below are some thoughts.

1) I understand why fans are excited by Baker Mayfield. His numbers from Week 2 were phenomenal. Outside of an interception in the fourth quarter, Baker seemingly made no plays that really hurt the team. That is definitely an improvement.

2) The key area where improvement occurred is that Baker trusted Stefanski’s play calls and scheme. Specifically, when asked about this at a press conference a few days prior to the game against the Washington Football Team, Baker noted that the Alex Van Pelt and Kevin Stefanski “have said many times to trust that their play calling will get the ball in guys’ hands to get them going, and I just do my job.” This is a positive trend because it should reduce Baker’s forced throws into tight coverage.

3) Nonetheless, I am not sure Baker’s improvement was anything more than marginal. Baker was still forcing throws into tight coverage and reading plays slowly. This is clear looking at film. First, while the play below is a completion, there is a very clear problem:

From this view, beyond the throw going into tight coverage, it does not seem like there is much of a problem. And regardless of the coverage, it was a great throw, but another view shows a different story.

When one watches the NFL’s All-22 film from this view, Baker clearly only makes one single read. If the Bengals had better safety play, this pass could have been disastrous.

Unfortunately, Baker’s problems go beyond staring down receivers. He also tends to make reads slowly. This is clear watching a pass to Odell Beckham Jr. on the same drive.

Baker takes nearly three full seconds to go through his first two reads. This results in two things: first, Baker misses OBJ when the latter initially gets open; and second, the pocket collapses, which forces Baker to scramble. Therefore, while the outcome is good, the process is not.

Finally, the interception. Strangely, I have less of a problem with this pass than the two previous ones. The Bengals covered all the routes unbelievably well, and while Baker could have done a better job throwing Harrison Bryant open or just throw-away the ball, the process here was okay.

4) So are the Bengals just that bad? Yes, but that is not the entire reason why the Browns’ passing game looked strong. Kevin Stefanski is the real deal.

Even without implementing the entire offense, much of the play-calling mirrors what the Vikings did last season. Per Sports Info Solutions, the Browns have run four play-action bootleg passes (and have generated 4.6 EPA on those throws – second-best in the NFL), thirty outside zone runs, and five inside zone runs.

At this time last year, the Vikings had run four play-action bootleg passes, thirty-one outside zone runs, and four inside zone runs. Consequently, the numbers are nearly identical.

Ultimately, for the Browns to be successful, Stefanski will need to continue to scheme effectively and call great games. In doing so, one hopes that Baker will improve.

5) Outside of the Bengals game, ESPN recently polled twenty-six NFL staffers about what teams are most utilizing analytics. The Ravens and Browns rate first and second respectively.

One could find this surprising, especially given the conversations around how analytics believe “running the ball does not matter.” The two teams that most embrace analytics are also heavily utilizing the running game. Each team has their own reason.

For the Ravens, a recent PFF study finds that quarterback scrambles are sometimes more efficient than throwing plays and increases the value of all other running plays. Thus, considering the Ravens may have the best rushing quarterback of all-time, the relationship between analytics and Baltimore’s run game makes sense.

For the Browns, the answer is even more simple. Through the first two weeks of the season, per Sports Info Solutions’ “points earned” metric, the Browns generate the second-most points earned per rushing attempt in the NFL. Meanwhile, they have generated precisely “zero points” in this metric from throwing the ball.

(Click the hyperlink to understand, “points earned”, because it does not actually reflect total points scored)

Overall, I think there is reason to be optimistic for the Browns. Nonetheless, I am not certain how much, exactly, the Bengals game predicts the rest of the season.