The (Re-)Ascension of Baker Mayfield

A look into the growth of Baker Mayfield during the 2020 season. 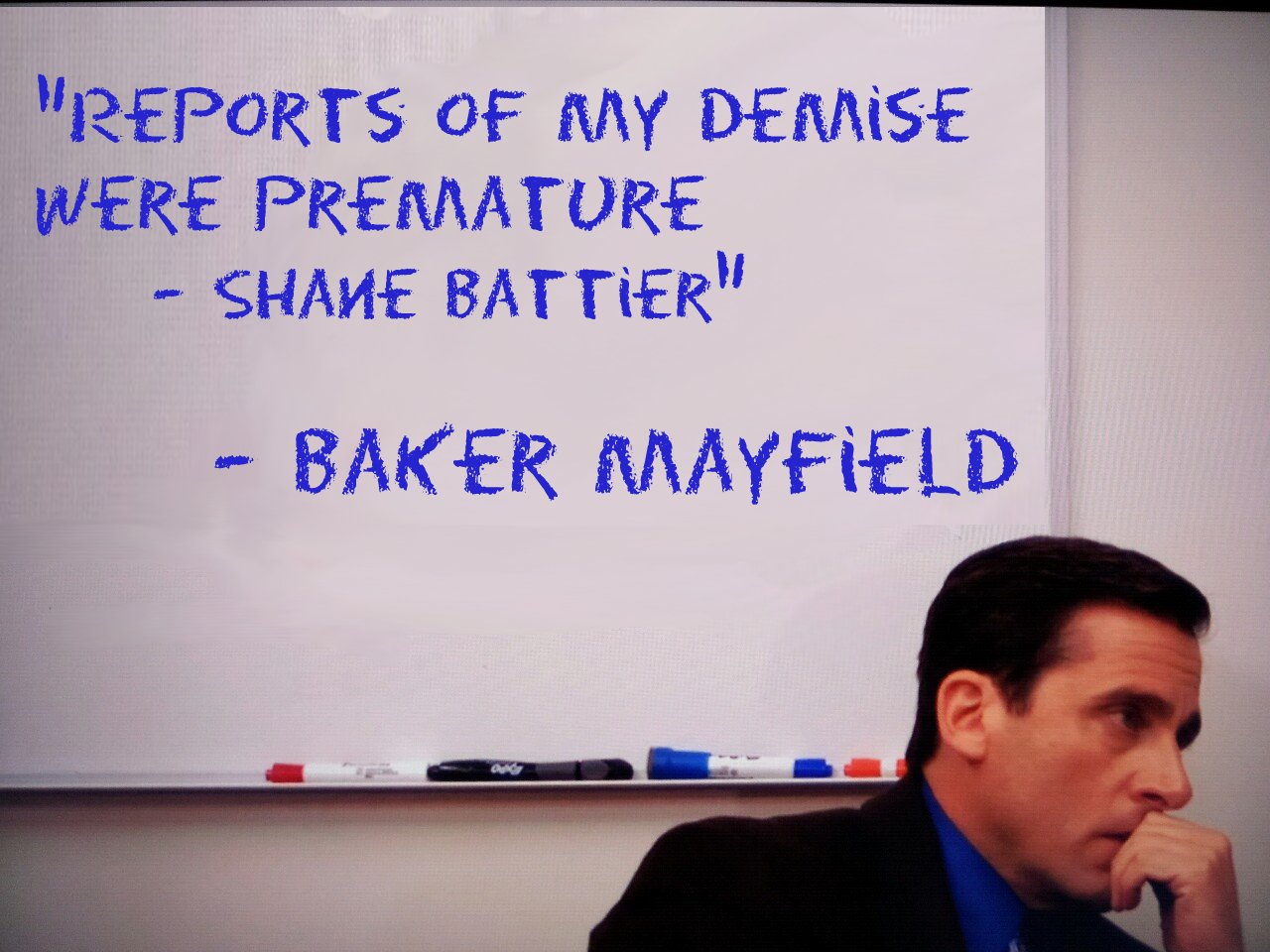 A tribute to Baker Mayfield's propensity to use pop culture references in his 2020 press conferences - originally undoctored image from The Office, NBC

Baker Mayfield has endured an entire career’s worth of highs and lows, regime changes, teammate shuffling, and drama over his first three seasons in the NFL. Mayfield burst onto the scene in primetime under the bright lights of Thursday Night Football and proceeded to dazzle the league with a record-setting rookie campaign in 2018. He came crashing back down to earth (for a variety of reasons) with a disappointing sophomore season in 2019. And the 2020 season has been a microcosm of the entire journey featuring plenty of ups and downs.

But make no mistake about it – right now, as the Cleveland Browns enter Week 16 with their sights firmly set on their first playoff berth since 2002, things for Baker Mayfield have been looking unequivocally up.

The 2020 Browns season came saddled with a gigantic elephant in the room. The franchise soon faces major decisions about former #1 overall pick, Baker Mayfield. First, the team must decide whether to pick up Mayfield’s 5th year option (estimated to be between $18-$20 million per the current CBA). Ideally this move would be a no-brainer, but sometimes highly drafted, under-performing young QBs do not justify the price tag (see: Chicago Bears, Mitchell Trubisky). The second, much larger decision is whether to pursue long term contract extension talks with Mayfield. The Browns assuredly hoped by season’s end the answer to both questions would be a resounding and unanimous ‘yes’.

However heading into this season, there was a great deal of uncertainty around Mayfield. Some of the blame for this uncertainty fell at the feet of Mayfield, the rest at the feet of the historically unstable organization that employs him. In his first two seasons, Mayfield had offensive schemes constantly changing around him with the various coaches who came and left Berea. Mayfield endured a sophomore year in which his offensive line was depleted of talent, while he himself was uncharacteristically out of shape and unprepared for the season. These factors led to a major regression from his sensational first season. His throwing mechanics and footwork deteriorated as he often fled from unimpeded defenders. His trust in his offensive line and the pocket waned. His trademark accuracy and confidence quickly disappeared along with the hope generated by his 2018 rookie season.

Which brings us to 2020. In life, nothing can be certain except for death, taxes, and a Browns’ coaching change. Kevin Stefanski was hired to be Mayfield’s 4th head coach in three NFL seasons. This time, however, was the last chance for the Browns to get the answers to their questions about Mayfield before it was too late.

After an embarrassing opening game against the Baltimore Ravens, the Browns had an excellent start to the season. They began 4-1, but most of the credit for the hot start was appropriately given to Stefanski and the potent running game he had established. Mayfield did look improved from 2019 but still displayed some residual inconsistency. Fans and the media questioned whether Mayfield could be ‘the guy’ or if he was merely a ‘game-manager’ piggybacking on the success of the run game. Then came a much-anticipated Week 6 in Pittsburgh which put many over the edge. Mayfield threw a pick-6 on his first attempt of the game, and the Browns never put up a fight. They lost 38 – 7 to the Steelers. Rock bottom.

The nice thing about rock bottom is you can only go up from there. Many of the statistics cited when discussing Mayfield’s 2020 success come with a caveat: “since Week 7”. This is because Week 7 of the 2020 NFL season is the moment in history when things finally clicked for Baker Mayfield. And dramatically so. Mayfield began the Week 7 contest against the rival Cincinnati Bengals 0-for-5 passing with an interception that led to an Odell Beckham Jr. season ending injury. It seemed the Baker Mayfield experience was drawing near to a disappointing end.

Mayfield went on to surgically pick apart the Bengals’ defense, completing 22 of his next 23 pass attempts including the game winning touchdown toss. His lone incompletion was a spike to stop the clock. Mayfield delivered an all-time performance that day, and since that day he has never looked back. Following that first quarter pick in Week 7, Baker Mayfield has thrown 15 touchdowns with only 1 interception. And for context, the Browns played in three games over this span plagued by absolutely brutal lake-effect weather. The advanced metrics paint a similarly stellar picture of the quarterback’s resurgence.

As pointed out by @benbbaldwin here, Mayfield’s QB efficiency since Week 7 compares favorably to Aaron Rodgers and Patrick Mahomes. This particular graphic charts Expected Points Added and Completion Percentage Over Expectation, suggesting that Mayfield is over-achieving and over-delivering for his team in difficult passing circumstances. Metrics such as these directly dispel concerns that Mayfield’s ceiling is limited to ‘game-manager’.

This tweet by ESPN’s Jake Trotter shows that Mayfield holds the NFL’s top QB rating on play action. Play action is Kevin Stefanski’s bread and butter, and the roster has been constructed accordingly with an elite running attack and several talented tight ends. Mayfield’s uncanny ability to sell the fake and his unmatched success in the play action game meshes perfectly with Stefanski’s style. This signals the potential for sustainable success in this system.

As @JohnKosko3 from PFF points out above, Baker Mayfield has also proven to be more than a one-read quarterback this season. A concern even since Mayfield’s time at Oklahoma was whether he could successfully read a defense and go through progressions. This season Mayfield has been excellent at keeping his eyes down the field and scanning for the open receiver when his first read is taken away by defenses. This is another key trait that gives optimism for sustainable, long-term success as defenses continue to adapt and challenge Mayfield in different ways.

Mayfield has made significant strides in his development as a franchise quarterback this season. He has found success against every level of competition and quality of opponent, including teams with Super Bowl aspirations. He has overcome a tremendous amount of adversity and looks to be finding his footing under the tutelage of Kevin Stefanski and offensive coordinator Alex Van Pelt. One can rationally assume Mayfield will look even more comfortable and confident in his second season with these coaches and this system, with a sense of stability foreign to him thus far in his career.

As with any professional athlete, there is still room for growth. But Mayfield has answered the bell during the 2020 season, and he has allowed the Browns to confidently answer the two pressing questions about his future.