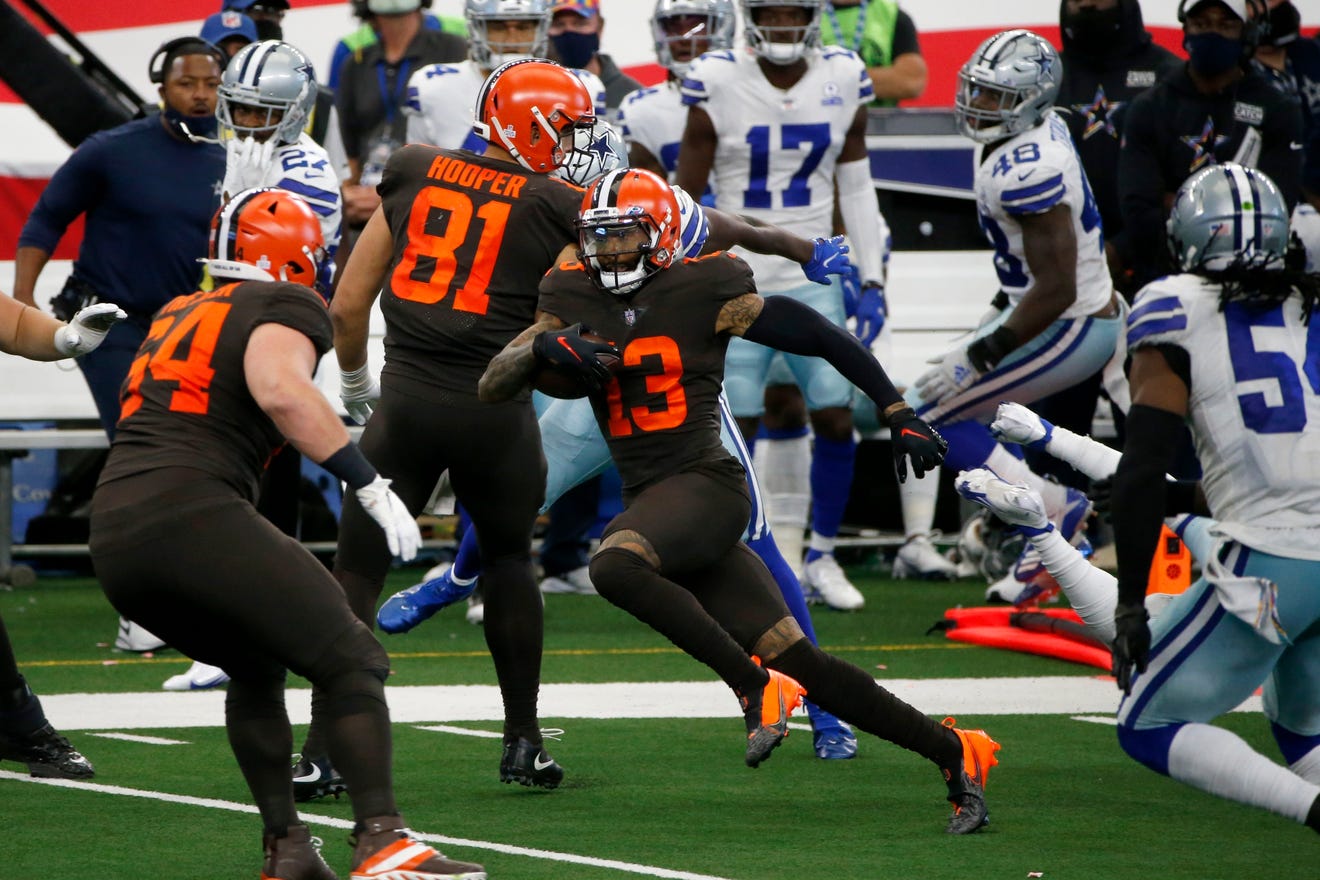 The Week 4 matchup between the Cleveland Browns and Dallas Cowboys was one of the more exciting NFL games in recent memory. The game was a rollercoaster; what started as a back and forth contest turned into a potential laugher in Cleveland’s favor until a late charge by Dallas made for an exciting finish.

A few thoughts on the Browns’ performance Sunday…

Cleveland once again leaned heavily on their impressive run game, but this week received contributions from some unfamiliar faces. 3rd year star running back Nick Chubb unfortunately left the game early after getting his leg rolled up on by a defender. Despite losing arguably their best player on offense, the Browns showed resilience and depth by refusing to skip a beat. Kareem Hunt stepped in seamlessly as RB1 with 71 rushing yards and 2 rushing touchdowns. D’Ernest Johnson seized his opportunity and poured in 95 rushing yards on 13 carries. And even Dontrell Hilliard, elevated from the practice squad only a couple days prior to the game, chipped in with a handful of tough rushes. With the news today that Chubb will likely miss 6 weeks due to the MCL sprain he suffered yesterday, the Browns will need similar contributions from their committee of backs going forward. If the offensive line keeps performing the way they have been, there is reason to believe the Browns can survive Chubb’s absence.

Speaking of the offensive line, yesterday was yet another elite performance by this group. The offensive line abused Dallas’ defensive line for most of the day. They created giant holes in the run game and kept Baker Mayfield extremely clean with their pass protection. Wyatt Teller specifically continued his stellar breakout campaign as the highest graded offensive player on the Browns by PFF. The rebuilt offensive line has been performing as hoped and as hyped so far this season. Offensive line coach Bill Callahan has earned much deserved praise for the work he has done with his group; he has transformed the offensive line into arguably the best in the NFL. Next week’s matchup against the Indianapolis Colts and star DL DeForest Buckner will be another great test for the offensive line.

The star of the game was unquestionably Odell Beckham Jr. With 2 receiving touchdowns and the game-sealing rushing touchdown, Beckham put his fingerprints all over this one. OBJ has been talking the talk and walking the walk as a model teammate so far this season despite lower usage than fans are conditioned to seeing from him. Against the Cowboys, however, the NFL was reminded what Odell can do. He was electric on his scoring plays, but he also made several less sexy critical possession grabs throughout the contest to keep the chains moving. In the past Beckham’s contributions have sometimes been questioned and criticized as empty stats. Not even the staunchest of disparagers could downplay his impact in helping the Browns secure a victory yesterday.

The Browns’ third year signal caller continued making positive strides with his performance against Dallas. Once again Baker was merely asked to manage the game responsibly by leaning on the run game, making timely throws when needed, and protecting the football. After recording his 8th straight game with an interception in Week 2 against Cincinnati, Baker has now started a new streak. Sunday marked his 2nd consecutive game without a turnover. Kevin Stefanski and Alex Van Pelt are doing a tremendous job steadying Baker after a tumultuous start to his NFL career featuring multiple coaching and front office changes. More performances like Sunday will allow Baker to gain comfort and familiarity with his new coaches and system. This should allow him to develop more organically and sustainably.

The Browns’ defense had another rough outing in terms of total yardage and points surrendered. The defense gave up 566 yards of offense and 38 points, albeit to a high octane Dallas Cowboys’ offense. Fortunately the Browns were able to force 3 turnovers (1 interception, 2 fumbles) to mitigate some of the damage and provide just enough resistance for a win. Defensive Player of the Year candidate Myles Garrett had his third straight game with a strip-sack as he continues his excellent comeback campaign. Star corner Denzel Ward, battling a groin injury, secured the game-sealing interception near the goal line with about a minute left. The holes at free safety and linebackers continue to draw the ire of fans, and Andrew Sendejo continues to be a fan non-favorite for his less-than-inspiring play. The hope is that this unit improves as they continue to play together, get healthy, and incorporate newer faces (e.g. safety Ronnie Harrison) into the gameplan. Defensive coordinator Joe Woods still has a ways to go with this group; hopefully a less daunting matchup against the Indianapolis Colts is a welcome sight for them.

Overall Sunday was a fantastic outing for the Browns. Very few pundits gave them a puncher’s chance in this matchup, but the Browns came out sharp and confident. The continued discipline, savvy clock management, and lack of turnovers reflect extremely well on rookie head coach Kevin Stefanski. In just his fourth game as head coach, Stefanski has already tied Hue Jackson’s win total over his entire 2.5 season tenure with the Browns. The Browns are sitting pretty at 3-1 at the conclusion of the first quarter of the season. The next two games against Indianapolis and Pittsburgh will be very telling about this squad’s 2020 trajectory and their chances of making a playoff push.