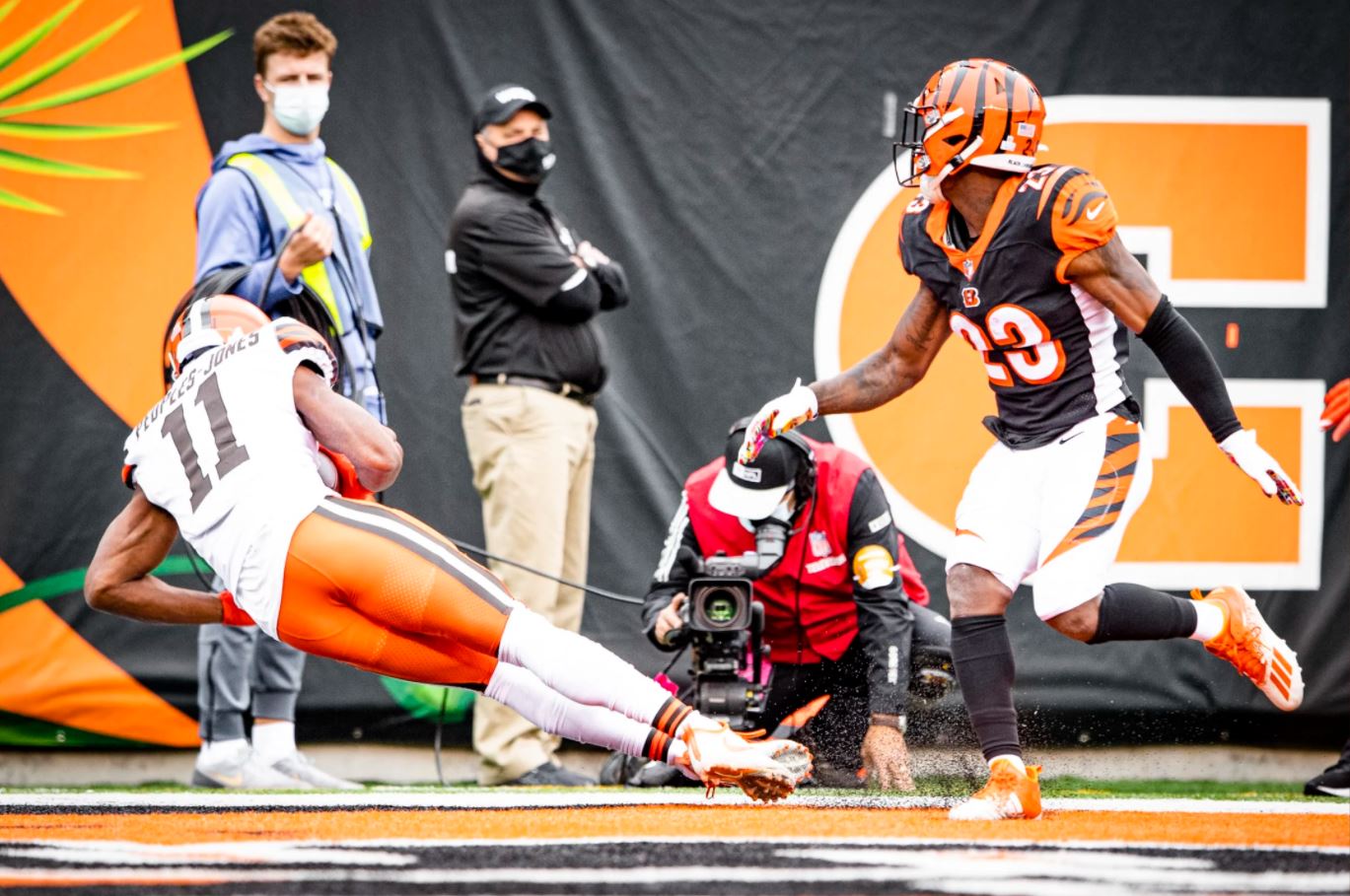 You can exhale now, Cleveland.

The final quarter of the 2020 Battle of Ohio was full of fireworks. The two young quarterbacks had an intense duel featuring 5 (FIVE!) go-ahead touchdown passes in the fourth quarter. The Browns were victorious, but it was not easy and it was not without great cost. Let’s dig in.

The first quarter of the contest was an absolute nightmare. The Bengals moved the ball seemingly at-will on the opening drive; when the Browns took the field to answer, disaster struck. Baker’s first pass attempt of the game was a deep shot up the right side of the field to Beckham Jr. There was miscommunication and bad ball placement which led to an interception by Darius Phillips (Mayfield’s 2nd straight game with a pick on his first pass attempt). Beckham Jr. attempted to chase him down, and he tore his ACL in the process. Another devastating, frustrating, and premature end to a season for Beckham Jr. We wish him all the best in his recovery.

After a nightmarish first quarter in which they lost their superstar wide receiver and could not get anything going, the Browns offense found their groove. The team continued to embody the “next man up” mentality as they have all season. With Pro Bowl tight end Austin Hooper out with appendicitis, rookie Harrison Bryant and David Njoku combined for three touchdowns. Seldom-used receivers Rashard Higgins and Donovan Peoples-Jones flanked Jarvis Landry and made play-after-play. Kareem Hunt made another strong start in the place of Nick Chubb. And the offensive line had an elite performance despite Wyatt Teller’s continued absence and JC Tretter playing through injury. It helps to play against the Bengals, but the Browns offense was clicking on all cylinders from the 2nd quarter onward.

Despite a few bright spots, it was another tough outing for the Browns defense. Joe Burrow carved up the defense for the majority of the day. Despite a depleted offensive line, Burrow did a great job of getting the ball out quickly to neutralize the Browns’ pass rush and blitzing. The linebackers and secondary struggled sticking with the Bengals talented pass catchers and gave up 406 yards to the rookie through the air.

Despite the big yardage and scoring numbers, defensive stars Myles Garrett and Denzel Ward put their fingerprints all over the game yet again. Myles continued his torrid start to the season with two more sacks including another strip sack as one of the only Browns’ defenders to generate consistent pressure. Denzel Ward was a demon in the secondary making plays in the passing game, including a tipped pass at the goal line leading to an interception, and strong tackles in the run game. These two young stars have done just enough to overcome the overall group’s woes so far this season, and they will likely have to keep it up.

The story of the game and the player of the game was unquestionably Baker Mayfield. After an abysmal showing against the Steelers, the first quarter looked like more of the same from Mayfield as fans across the internet reached their breaking point. However from the 2nd quarter on, a switch was flipped. After starting 0 for 5 with an interception, Baker was surgically precise. He completed 21 straight passes and 22 of 23 overall with 5 touchdowns from that point on; and the lone incompletion was a spike on the game winning drive. Baker looked like the quarterback who set the league on fire during his 2018 rookie campaign. He was deliberate, decisive, and confident. For the first time all season Mayfield was asked to win a game in the 4th quarter. He came through on back-to-back go ahead drives in the final minutes and gave Browns fans a glimmer, nay, an explosion of much needed hope about their young signal caller.

Through seven games the Browns are sitting pretty at an impressive 5-2 record. They have the NFL’s easiest remaining schedule. Next up is a matchup against the Las Vegas Raiders, a team in a very similar position to the Browns in the AFC playoff picture. A win this week would go a long way towards the pursuit of that ever-elusive first playoff berth since 2002. A loss would cast a sliver of doubt heading into the bye week. Regardless, the Browns are going to have to continue on their journey without Odell Beckham Jr., but unlike in past seasons, this Browns squad looks to have the resiliency to overcome such a loss. To quote the late owner of Cleveland’s next opponent, “just win, baby.”