The Browns find themselves on the brink of their easiest game of the schedule in week 16 against the Jets with the division leading Steelers facing a streaking and motivated Colts team. 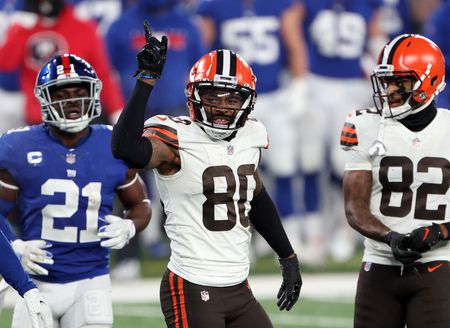 The Cleveland Browns advanced to 10-4 with a decisive nationally televised victory over the New York Giants on Sunday night. The franchise has now swept every team in the AFC South and NFC East in the same season. Despite some Browns fans writing this game off as an easy win, the Giants possessed the top spot in their division heading into the game due to the strength of a rapidly improving defense. Let’s look back at some very encouraging signs from this victory.

The Official Redemption of Baker Mayfield

So many Browns fans glossed over this matchup as an easy win without realizing this Giants defense was a formidable challenge. What they lacked in pass rush – a common criticism leading into the game – they more than make up in balance and discipline. No team had fared better in the Red Zone leading into the game. Their rush defense stood seventh in the NFL.

Despite the Giants defense posing a strong challenge in their own house, Mayfield provided one of his best performances as a professional.

According to ProFootballFocus, The Giants pressured Mayfield on eight dropbacks. He threw five passes and completed three. Two incompletions were throwaways. He took one sack, in which a rookie Nick Harris got beat quickly from the snap.

That leads to a rating under pressure of 104.2. The downfall of Baker Mayfield in 2019 and early this season was decision-making under pressure. He has faced this task with better footwork and getting the ball out of his hand quicker. In short, this is the best-case scenario for discussing Baker’s development.

Defensive Depth Rising to the Occasion

Mayfield’s footwork and decision making under pressure kept the Browns faithful nervous Sunday mornings, the defense had it’s own cross to bear. Myles Garrett and Denzel Ward play at a Pro Bowl level, with the supporting cast inconsistent from play to play. The Browns deactivated second year linebacker Mack Wilson after a dismal performance against the Ravens. Much-maligned Andrew Sendejo remained in the concussion protocol.

The Dawgs rose to the occasion to hold the Giants without a touchdown and only 288 total yards. The defensive backfield toughened up by holding the Giants to only five third down conversions out of eleven opportunities. Some Browns fans started the game furious that the defense hadn’t forced more punt situations, but the “bend never break” scheme continued to keep points off the board.

Up front, Olivier Vernon had four pressures in his revenge game. Both Ogunjobi and Garrett shared half a sack. Garrett looked winded at times in this matchup as he continues to bounce back from COVID-19, but the rest of the line is peaking at the right time in support.

B.J. Goodson rebounded well after his worst game of the season against Baltimore. PFF awarded Goodson the top run grade out of all the defenders after a few missed tackles a week before. Rookie Jacob Phillips drew the official start in place of Mack Wilson, but he served as a third linebacker in true 4-3 alignment situations. Veteran Malcolm Smith and Sione Takitaki continue to platoon as the second linebacker in nickel situations. Takitaki in particular is improving as a dependable tackler.

Most impressively, Denzel Ward’s return to the lineup allowed Money Mitch to return to his more comfortable second out side corner position and Kevin Johnson to return to nickelback. While Ward was not his usual self, this shift allowed Johnson to produce his best game in a few weeks. Johnson surrendered only two passes with one pass defended. Redwine held his own in place of Sendejo while Joseph had his best game as a Cleveland Brown in place of the now returning Rodney Harrison.

The Race for the AFC North Crown

This website danced in the proverbial streets when the Steelers unexpectedly needed to switch their bye to week four due to a Covid-19 outbreak. Teams with better records are rewarded with mid-season bye because they are better positioned heading into the playoffs.

Several pundits questioned how the Steelers could be undefeated late in the season without a viable running game or a quarterback who could throw the ball twenty yards. However, the answer revealed itself when the team dropped three games in a row. Pittsburgh went from well-rested for the first half of the season to currently falling apart.

Now the Browns find themselves on the brink of their easiest game of the schedule in week 16 against the Jets with the division leading Steelers facing a streaking and motivated Colts team. It’s good to be a Browns fan right now!