The Browns have signed the best running back the team has had since Jim Brown. Why are people criticizing the deal? Criticisms largely say that it is too little for Nick Chubb or that it is a waste of resources for the Browns. Let’s let the numbers decide. 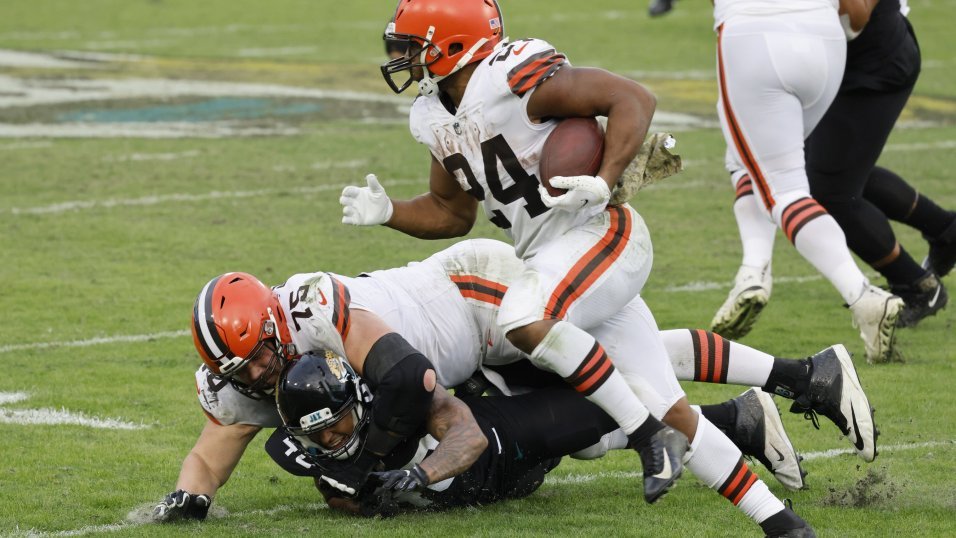 The Browns have signed the best running back the team has had since Jim Brown. Why are people criticizing the deal? Criticisms largely say that it is too little for Nick Chubb or that it is a waste of resources for the Browns. Let’s address each of these individually.

Why Nick Chubb Signed This Deal:

The Browns have re-signed Nick Chubb to a deal that should make everyone happy. This is true for Nick Chubb for three reasons:

First, this gives Chubb a longer-term guarantee that he lacked, while making $11 million more in base salary. That’s a substantial increase.

Second, Chubb has a history of major injuries. Getting $20 million guaranteed sets him up for life in a way that one more “rookie contract” season and two years of franchise tags would not. One injury during that period and Chubb’s future is bleak.

Finally, by only being three years long, Chubb can receive another contract while still in his prime. Injuries are a concern, but the total “pro carry” number that running backs usually decline at is 1,500 carries. Nick Chubb is not anywhere close to that number. This means that it is statistically plausible that Chubb could get another large payday in three more years.

Why the Browns Signed This Deal:

For some of us, Nick Chubb is the best Browns’ running back in our lifetime. How could they not re-sign him? The reason why this could be considered a “bad deal” lies within public analytics. Running backs provide less to a team’s ability to win than other positions. By re-signing Chubb, there are unforseen opportunity costs, such as being unable to re-sign other players or even future free agents.

I am going to make a three-part, analytically-driven argument about why I think this is a good deal for the Browns. Further, in this case, the aforementioned tenets of football analytics should not apply.

In terms of analytically-driven models – I.e., regression models – Nick Chubb is an analytics darling. The tweets below visualize a running back’s receiving and carrying performance over expected. Nick Chubb is clearly the best overall back at producing value over expected on all of his touches.

One could argue that Chubb’s performance is dependent on his scheme and offensive line. Nonetheless, there is a pretty significant reason to dispute this claim: Chubb has the best broken tackle rate in the NFL over the last two seasons, on average breaking one tackle every four carries and four yards after contact. Chubb’s success is independent of his scheme and offensive line.

Regardless, certain analysts would argue that even if Chubb is the best running back in the NFL and on a fairly team-friendly deal, the simple value of the position suggests this is a bad deal. I.E., Chubb is fairly replaceable.

For me to respond to this claim, it will require some advanced math, but with clear takeaways.

Kevin Stefanski’s offense is similar to Kubiak, Shanahan, and the rest of the QB Collective coaching tree.

By using Sports Info Solution’s data, we can identify broad run schemes. One way to identify this Kubiak/Shanahan scheme is by examining the number of times a team uses zone blocking, zone blocking with a fullback/H-back, or a single puller in order to run the ball outside or off-tackle. For example, this type of play made up 319 out of the Browns 494 run plays (or around 65%). While identifying the scheme this way discounts things like many inside runs, it does accurately point out which teams utilize this style more than others.

Inside zone run schemes tend to be simpler and useful for offenses that try to create large pass plays because of its relation to the read-pass option. Inside zone is similar to outside zone. Rather than attempting to run off tackle or stretching straight tot the perimeter, inside zone attempts to run off of the inner or outer hip of the guard, and it is especially focused on the latter.

This type of scheme tends to be run by teams in the Andy Reid school. It is a highly adjustable depending on your talent and uses inside zone and similar runs through the middle to setup long, multi-step drop pass plays. This scheme can be identified by looking for offenses that run inside zone, wham, trap, power, and counter while targeting the middle of the offensive line.

Finally, there are teams like the Ravens, Giants, and Chiefs that use a varied offense, but with more traditional power and gap scheme runs as a proportion of their total run plays than the rest of the league. This can be identified by looking at all runs that are not designated with zone blocking nor are aimed at attacking the outside of the line.

Last year I used regression analysis to test which run scheme had the greatest effect on passing efficiency. I found that, between 2017-2019, offenses that used the outside zone scheme increased “estimated points added per play action” by 0.24 points per play. I will repeat this process, but with data over a five year period (2016-2020) and fixed effects for “team” and “season”. This is important because an increased sample size means less room for error. Fixed effects allow me to control for a team like the Rams being historically good at a specific type of play. I.E., the 2018 Rams are a historically great outside zone team. By including fixed effects, if their numbers continue through 2019 and 2020, this effect is not viewed independently of previous seasons.

Put in another way, using fixed effects allows me to avoid multi-counting highly correlated data points. It also allows me to test within-variation on each team. This means that the Browns in 2016, 2017, 2018, 2019, and 2020 are not treated as individual, unconnected data points. As a result, Stefanski being hired and the offensive scheme changing will be noticed and accounted for in my model.

One important thing to note: all teams use varieties of these schemes every season. This study attempts to track plays within those schematic strategies by using Sports Info Solutions data. It is not perfect and there is likely heteroskedasticity and potential endogeneity problems. It is simply a “first look” report.

Similarly to last year, the regression model finds that outside zone run schemes have a positive, statistically significant relationship with pass effectiveness over the last five seasons.

Over the course of the last five seasons, going from 100 to 200 outside zone scheme snaps per season leads to an estimated increase of 36 estimated points added from pass plays over an entire season.

We see a similar trend when we solely look at play action. Over the course of the last five seasons, going from 100 to 200 outside zone scheme snaps per season leads to an estimated increase of thirteen estimated points added from play action plays over an entire season. For play action passes, though, we also see a similar and smaller impact from inside zone run scheme plays.

What this should demonstrate is that the number of rush attempts within a certain run scheme do have a statistically significant impact on passing effectiveness. One of these schemes makes up a dominant amount of the Browns’ rushing game and, unsurprisingly, this means the Browns run game does have a clear impact on their passing game.

This fixed-effects regression model and its related marginal effects demonstrate that Stefanski’s scheme’s passing success is predicated on having a strong run game. The Browns need to run the ball to be able to pass it in a way that is different than many other team’s run schemes. This is because a central tenet of the Shanahan scheme is disguising run and pass plays to allow for chunk gains.

Nevertheless, one could argue that, yes, analytics acknowledges that running is important to the scheme, but that does not mean the running back is crucial to the scheme. This leads me to part three.

Nick Chubb is not just generating yards because of the scheme. For any running back to demonstrate their worth outside of scheme, they need to show they are getting yards when it matters. One of these times is when teams are trying to closeout games in the fourth quarter.

But Chubb’s effectiveness goes beyond this. Out of running backs with at least sixty snaps in outside zone scheme runs during the 2020 season, Figure 6 suggests that a large proportion of these runs are also creating first downs.

The whole idea of the Shanahan/Kubiak scheme is to do two things: first, it wants make run plays look like pass plays and, therefore, increase passing efficiency; and second, use the run game to create chunk plays, just like you would do with the passing game.

The first part was addressed in the aforementioned data study and the second is addressed in Figure 6. Nick Chubb runs like most teams pass. He gets major yardage and first downs out of outside zone scheme runs. He is one of the most analytically valuable players in the NFL, regardless of the position he plays.

Nick Chubb’s new contract is ideal for both he and the Browns. It is largely true that, analytically-speaking, most running backs do not matter. Nick Chubb, though, generates passing-level success out of runs, runs at an efficiency better than most other NFL running backs, and is crucial to Stefanski’s scheme and Baker Mayfield’s success. Nick Chubb matters to the Browns and paying him 5% of their cap is absolutely a worthwhile contract.

Can The Browns Beat the Chiefs?
Second year Browns Ready to Make the Jump pt. 1