A look at how teams in the NFC South have handled free agency leading up to the draft. 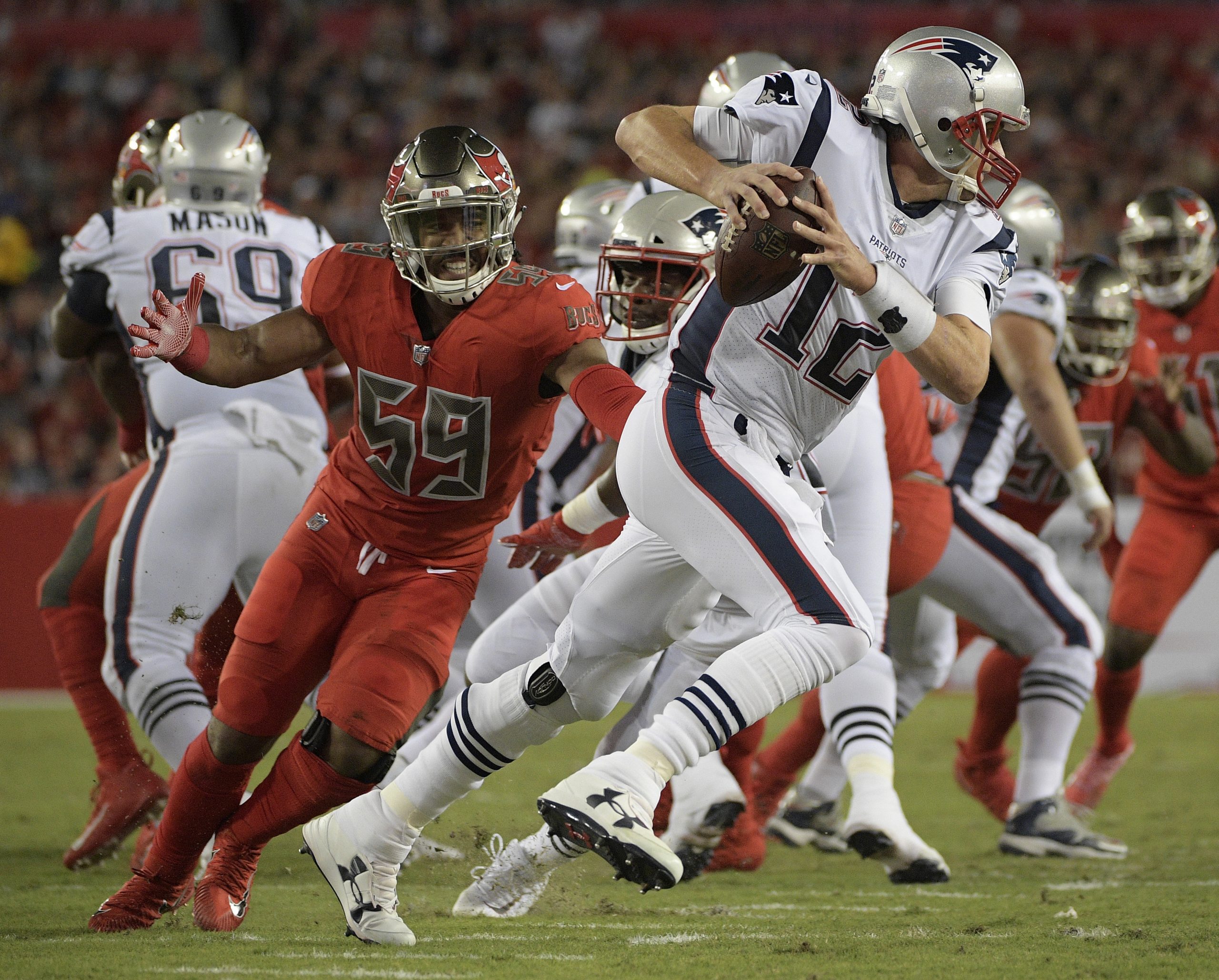 The Good: the New Orleans Saints are coming off their second consecutive 13-3 season and third straight division title. The Bad: the Saints are making annual playoff heartbreak a bit of a habit. The season started in rollercoaster fashion; a wild primetime win against the Houston Texans followed by an ugly loss to the LA Rams in which Drew Brees was lost to a thumb injury. Impressively, the Saints were able to rally behind QB Teddy Bridgewater, winning five straight games during Brees’ absence and keeping the season alive. The Saints looked to be peaking at the right time as the playoffs began, but put up an uninspired effort in a loss to the Minnesota Vikings on Wild Card weekend. With Brees’ retirement clock ticking, the Saints need to find a way to maximize their 2020 campaign.

Thus far the Saints have had a solid offseason, mostly focused on retaining their own, but with a couple of nice splashes. The Saints were able to re-sign three vital players in DT David Onyemata, OG Andrus Peat, and most importantly, QB Drew Brees. They were also able to keep DE Noah Spence and S D.J. Swearinger on one year deals to avoid creating any additional unnecessary holes. The big gets of the offseason were the signings of WR Emmanuel Sanders and S Malcom Jenkins from San Francisco and Philadelphia respectively. Sanders should provide an excellent complementary option across from superstar WR Michael Thomas, and Jenkins provides an upgrade and great leadership qualities out of the safety position after the departure of Vonn Bell.

The Saints could look to fill their remaining holes using their draft capital. They traded away their 2nd and 7th rounders, but have their remaining five selections to address a few position groups of need. Their linebacking group is aging and lost A.J. Klein to the Buffalo Bills in free agency. They could also use help in the secondary, specifically cornerback, after the departure of Eli Apple. And the most intriguing need is quarterback with Drew Brees’ impending retirement and uncertainty about the long term quarterback prospects of swiss-army knife Taysom Hill. The Saints will look to find day-one contributors to bolster a solid roster and possibly their final Super Bowl run with Brees at the helm.

The 2019 season for the Carolina Panthers proved to be a changing of the guard. Another injury-riddled season from Cam Newton led to his eventual departure. After a long tenure including a Super Bowl berth, the team decided to part ways with Ron Rivera. Panther legend Greg Olsen played his final snap in the baby blue and black. Superstar LB Luke Kuechly announced a surprise retirement due to health reason. Somehow despite all this change amidst a disappointing 5-11 season, the Panthers seem to have a bright future as owner David Tepper has begun to put his fingerprints all over the organization.

So far this offseason, the Panthers re-signed their dynamic offensive workhorse RB Christian McCaffrey. They hired a new head coach, poaching the well-regarded Matt Rhule from Baylor who was able to snag offensive wunderkind Joe Brady from LSU to be his OC. They also signed a new signal caller in Teddy Bridgewater who performed admirably in place of Drew Brees in New Orleans. They continued to add speed at the skill positions, signing WRs Robby Anderson and Seth Roberts. They traded OG Trai Turner to the LA Chargers for LT Russell Okung. They also addressed holes on the defense by adding DE Stephen Weatherly and LB Tahir Whitehead. It has been a busy offseason in Charlotte as they begin a complete re-tooling. The Panthers will continue to rebuild their roster in the upcoming draft using their full slew of draft selections plus an extra 5th rounder via the Kyle Allen trade to Washington. They have needs in the secondary and will likely look to add a defensive back early. The departure of Kuechly leaves a large hole at linebacker that they will surely try to address as well. And while they upgraded at LT with the Okung trade, they now have a need to fill on the interior offensive line. With all the changes, it is difficult to predict how the 2020 season will play out for the Panthers. But it is hard to argue with the moves they have made thus far, setting themselves up for a new era of Carolina football.

2019 proved to be yet another disappointing season for the Atlanta Falcons relative to their talent level and expectations. The squad started 1-7 over their first eight games, virtually ending their season before it began. Once out of contention, however, the Falcons strung together an impressive 6-2 finish in the second half of the season, potentially saving HC Dan Quinn’s job. The team is looking for a return to the form that had them competing in the Super Bowl only a handful of years ago, but has been held back by offensive line woes and production in the run game. They entered the 2020 offseason with a complicated salary situations with many tough decisions to be made.

The Falcons started their difficult offseason by parting ways with CB Desmond Trufant, OLB Vic Beasley, and RB Devonta Freeman. They also lost productive TE Austin Hooper to the Cleveland Browns in free agency. They quickly worked to fill the voids left by these departures. The Falcons signed DE Dante Fowler from the LA Rams to replace Vic Beasley on the edge. They traded a 2nd round pick to the Baltimore Ravens for TE Hayden Hurst to overcome the loss of Hooper. And finally RB Todd Gurley made his return home to Atlanta after being released by the Rams. The Falcons will look to continue to fill holes using their six draft picks, consisting of four picks in the first four rounds. They have not yet addressed the hole left by the departure of Trufant, so defensive back will likely be a position of emphasis with a high selection. The Falcons could also use additional help on the offensive line to protect 34 year old QB Matt Ryan. Finally, Atlanta could use more talent on their front seven to improve their pass rush and run defense. Expectations will once again be high for the Falcons in 2020 after their hot end to 2019; another underwhelming performance would likely lead to wholesale changes for the franchise.

The Tampa Bay Buccaneers had a rollercoaster of a season in 2019, led by their erratic QB Jameis Winston. It was a promising yet frustrating first year for HC Bruce Arians in Tampa Bay as he watched Winston lead the league in passing yards while also leading the league in interceptions with 30. The continued emergence of star WR Chris Godwin was offset by another disappointing campaign from high draft selection TE OJ Howard. While 2nd year RB Ronald Jones showed flashes, the ground game continued to lack consistency. The run defense, however, was ranked first in the league. Tampa Bay entered the 2020 offseason looking to add some consistency to a volatile organization.

Enter Tom Brady. The Buccaneers made the biggest splash of free agency by luring future Hall of Fame QB Tom Brady to Tampa Bay from New England. Replacing Jameis Winston with Tom Brady is such a drastic change that Buccaneers fans may want to brace for whiplash. On the defensive side of the ball, the Buccaneers were able to re-sign the very productive trio of DE Jason Pierre-Paul, DE Shaq Barrett, and DT Ndamukong Suh. After the offseason they have had, the Buccaneers enter the draft in a different position than they may have anticipated in January. They are in win-now mode to maximize Tom Brady’s final years, and will look to shore up a few position groups to ensure a viable contention window. Positions of need include offensive line, youth to groom behind their veteran defensive line, and a dynamic ball carrier to spark the run game. Expectations changed greatly for this bunch overnight, and it will be very interesting to see how the team responds behind their new all-time great signal caller.