The Browns faced off against the Las Vegas Raiders on Sunday, November 1st. At times, there seemed to be higher forces also controlling fate. 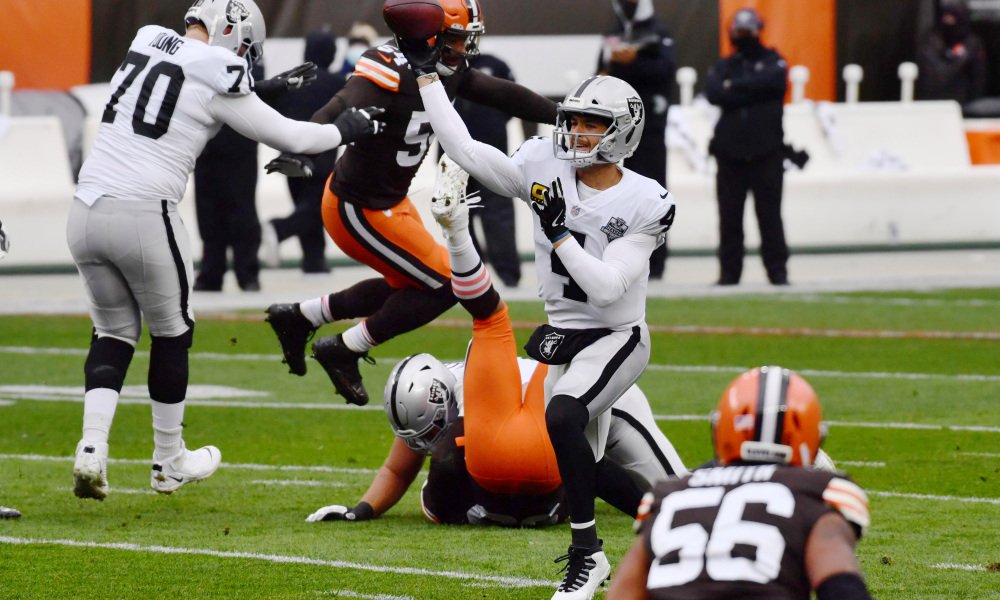 The Greek god of wind, Aeolus, must have a vacation home on the Great Lakes. In today’s football match between the Las Vegas Raiders and Cleveland Browns, nobody dominated the game like the elements. In the end, the mortals from Las Vegas emerged victorious in a game that remained exciting and undetermined until a Cody Parkey field goal hooked violently to the left with under two minutes to go.

What the Browns Could Not Control

The Browns failed not only to control the harsh weather, they also failed to control another key element. The Browns could not control the clock, which has been one of the strong points of the franchise all season. In this game, Kareem Hunt could not pop many big gains. Rookie left tackle Jedrick Wills made some costly errors in run blocking and committed a few penalties.

This contributed to the Browns only attempting 22 rushes, with Hunt limited to 14 rushes for 66 yards. While his 4.9 yards per carry continue to be impressive, going 3 for 10 on third down held the running game back.

Along with that problem, the Raiders had a strong game running the football in their own right. Josh Jacobs able to gouge away at the Brown defense with 31 rushes for 128 yards. In support, his backup Devontae Booker averaged 5.8 yards per carry. The one-two punch secured a 37:43 to 22:17 time of possession advantage for the Raiders.

Cronus, the destructive Greek god of time, surely supported Aeolus on this quest against the hometown Browns.

Additionally, the Browns could not control the judgement of the replay officials. Jarvis Landry appeared to secure a touchdown pass from Baker Mayfield in the third quarter before the ball came into contact with the field. However, replay officials did not agree and forced the Browns to kick a field goal.

Oddly, Hunter Renfrow seemed to also have a ball touch the ground in a very similar fashion on a fourth quarter four yard touchdown. Replay again sided with the Raiders.

Perhaps the Greek goddess Dike fell into a supernatural pact with the other gods in taking opportunities away from the Browns. We mortals may never know the wheelings and dealings of Mount Olympus.

What the Browns Could Control

The Browns offense needed to give the struggling run defense more than six points if the Browns were to have any chance at a win. Despite a lot of complaining about the pass defense or the defensive line failing to control the line of scrimmage, this falls squarely on the playmakers on offense failing in the passing game.

Mayfield gave the Browns a decent chance to win. He did not commit a turnover and never surrendered a sack, avoiding lost yards whenever possible. He converted two key fourth and one plays himself.

However despite completing 112 of 25 passes, the majority of those incompletions were on very catchable balls. The elements made the passing game challenging for both franchises, however it seemed Derek Carr was soundly outplayed by the Browns quarterback.

The difference between the two were the targets of passes. Landry was awarded two bad drops, while Hunt, Janovich and Njoku also killed drives by allowing very catchable balls to ricochet off their hands with no defender around. While Hunter Bryant had some good moments, his fumble killed the first drive of the game for the Browns – one that seemed to be setting the tone of the game.

Myles Garrett injured his knee in the game, which changed the complexion of the game for the front seven. Hopefully the cornerstone of the defense will be available after the bye week.

Multiple key players will be expected to return to the lineup after the bye as well, including key offensive starters Nick Chubb, Wyatt Teller, and Austin Hooper.

The Browns may make a minor deal at the trade deadline, especially with two weeks to acclimate a player. Never the less, the players they have in the locker room already stand to make the biggest impact if they can get back to 100% health.

As always, follow us at Realcavsfans.com as well as @Realbrownsfans and @Real_Brownsfans on Twitter. Spread the good word, down with the bias of Greek mythology. Go Browns!