Is it Baker doing enough? 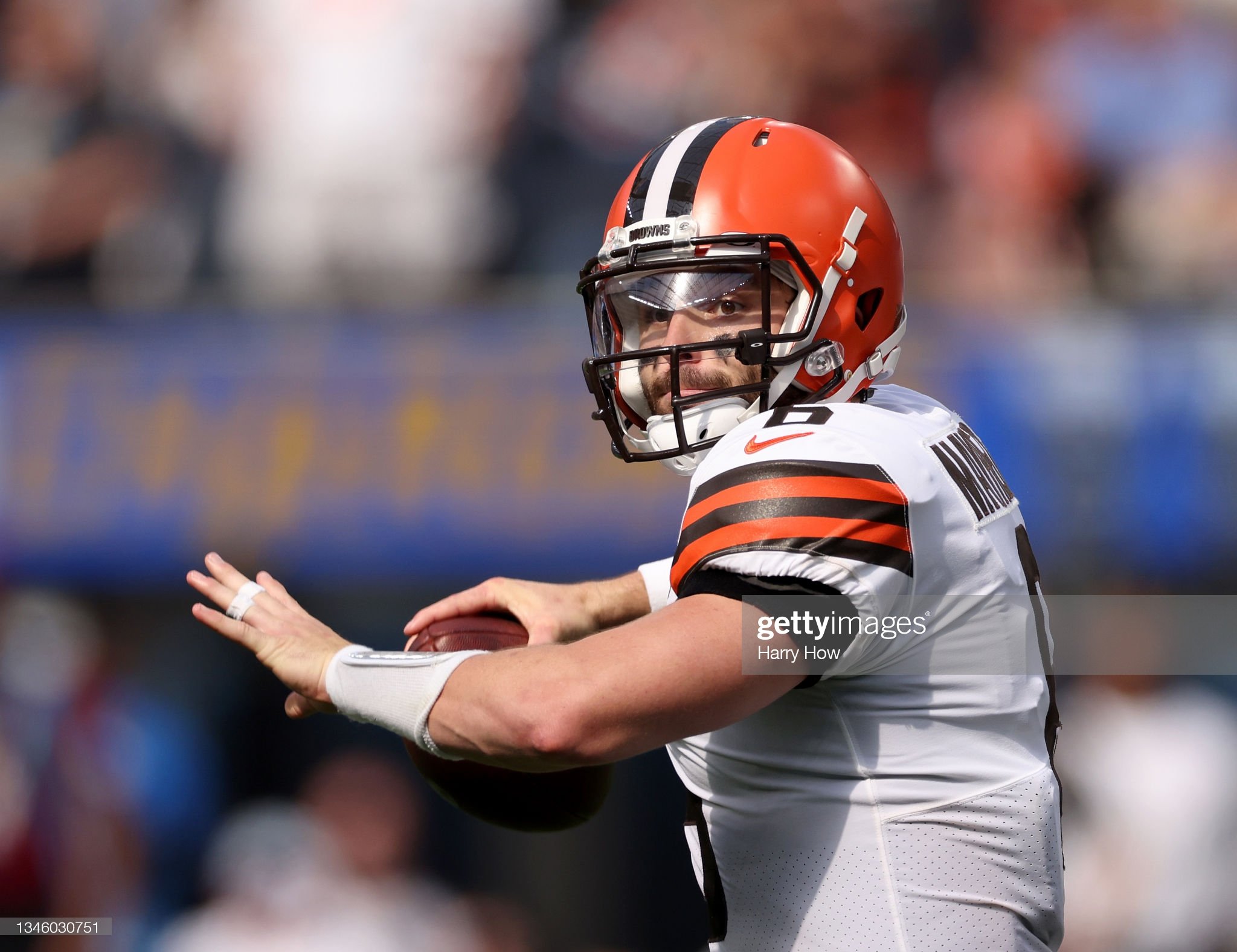 INGLEWOOD, CALIFORNIA - OCTOBER 10: Baker Mayfield #6 of the Cleveland Browns looks to pass during a 49-42 loss to the Los Angeles Chargers at SoFi Stadium on October 10, 2021 in Inglewood, California. (Photo by Harry How/Getty Images)

The burning hot question on Browns media, Browns Twitter, Browns group texts, Browns message boards and all other forms of conversation has been the same this week: Is Baker Mayfield the guy, the franchise QB for the Browns? And there have been a ton of answers from “Most Definitely” to “We need to replace him immediately”. But what if the Browns fans are asking the wrong questions of Baker and instead need to be asking a different question. What if this is exactly how the Browns want Baker Mayfield to play? What if they want him to rely on his awesome running game, his juggernaut offensive line and his strong group of tight ends? Or do they need more from Baker and is he what is standing in between the Browns and the Super Bowl?

Perhaps the biggest misconception of what the Browns want to do is to make Baker Mayfield into a game manager of sorts. Sure, the Browns are minimizing risks, but that’s not a Baker problem as much as it is a offensive design and philosophy. While Browns Head Coach Kevin Stefanski is usually pretty coy with the media, his offensive design and philosophies have come from a very popular and offensive scheme: The Shanahan/Kubiak Offense.

The Browns ran this system in 2014, where they enjoyed great success on offense until they lost center Alex Mack and then used the roaring inferno of a mess that was Johnny Manziel onto the field. The Browns saw a return to this offense in 2020 and have enjoyed great success using Nick Chubb, Kareem Hunt and the powerful Browns offensive line to 11 wins last year. But what are the philosophies of Gary Kubiak? Well, luckily, we can go straight to the source here, as Robert Mays, writer for the Ringer at the time, interviewed Gary.

When Kubiak and Mike Shanahan left San Francisco in 1995 to become the offensive coordinator and head coach, respectively, of the Broncos, they took the basic outline of Walsh’s West Coast offense with them. Shanahan paired that philosophy—which included a quick-passing approach and split-back setup—with the innovative outside-zone running game devised by offensive line coach Alex Gibbs.

Kubiak rode that offense to great success, eventually becoming Head Coach of the Houston Texans. While with the Texans, he also amassed young talent, such as Kyle Shannahan and both of the LeFleur brothers along with some other key young assistants such as Mike McDaniel, who is now Kyle Shanahan’s offensive coordinator for the 49ers. Kubiak also took a role with the Minnesota Vikings as their head offensive assistant, where he made a huge impact on young QB coach and eventual offensive coordinator for the Vikings, Kevin Stefanski. As noted with the previous article:

Stefanski says that designs in the 2020 Browns playbook are exact replicas of plays that the Texans used under Kubiak. But even in cases when some details have changed, the building blocks of the offense have remained the same…Stefanski had always known that he wanted to run some version of this system, but he never imagined he’d have the scheme’s architect sitting just down the hall when the opportunity came.

The offense focuses on a quick passing game that focuses more on yards after the catch, it is easy to see why Baker is struggling to push the ball on offense. The entire goal of the offense is to quickly move the ball out of your hands and let the talent do the job. It’s also incredibly easy for Baker to fall into the trap of always staying within structure of the offense and get the ball out quickly.

Unfortunately, we cannot get passed the biggest issue, which is still Baker Mayfield. While the offense is designed in a certain way, there is still the problem of Baker. Sometimes, QBs need to make a play when everything goes wrong. Even some of the best offenses in NFL history needed to make plays when the play has been breaking down. As noted by Jake Burns on Twitter:

Baker is too quick to bail on a play when it is broken. This is something that has developed after 2018, which is when he first suffered his problems in the NFL. The question isn’t “Can Baker Mayfield make these throws/plays?” but rather “Why won’t Baker make these plays anymore?”. While some of it can be attributed to always playing within the system, but I think it’s safe to say there is some sort of mental block here.

Baker’s struggles in 2019 led to him being universally panned and started to question him as the future franchise QB of the Browns. Did this have an impact on his game, making him more risk adverse to throwing an interception? Not really, although something noticeable did happen between 2018 and 2019. Baker’s aggressiveness rating, which as defined by Next Gen Stats as:

suddenly went up to near the top of the league. He clearly felt the pressure to make the play and started to force the ball. Going from 15.6 in 2018 to 18.9 in 2019, Baker was forcing the ball to his receivers more, which also, shockingly, lead to more criticism about his play. In 2020, Baker’s rating went all the way down to 13.8, a massive drop and it showed on the field. Baker just hasn’t been taking any risks with his throws.

The question now becomes, can this be fixed? It’s all up to Baker Mayfield and Kevin Stefanski to change things for the Browns. Receivers are wide open, and we’ve seen Baker perform at the level that we all expect before. Even last year, we saw Baker push the ball down the field more, as we can see with NGS and his Completed Air Yardage. Last year he was 2nd in the NFL in CAY, and this year he is way down the list, going from almost 8 yards to nearly 6. The ball simply needs to be pushed down the field more. It should be noted that Baker’s career high in CAY was in 2020, well over his career norms in nearly every other year.

The ball is in the court of Baker and Stefanski now. Can Stefanski add new wrinkles to the offense that will maybe scheme more players open? Can Baker regain that aggression and get to pushing the ball down the field more? Can he continue to improve on taking care of the ball while also getting that big play feeling that he gave in 2018? Time will tell, but if he does, he is going to get a big contract!

Follow RealBrownsFans.com and This is Believeland Real Browns Fans podcast for more!

Velvety Rich Week 5 Browns Mailbag – Brought to you by the Cheesecake Factory
Safety in Numbers – What’s Up with Browns Safeties?