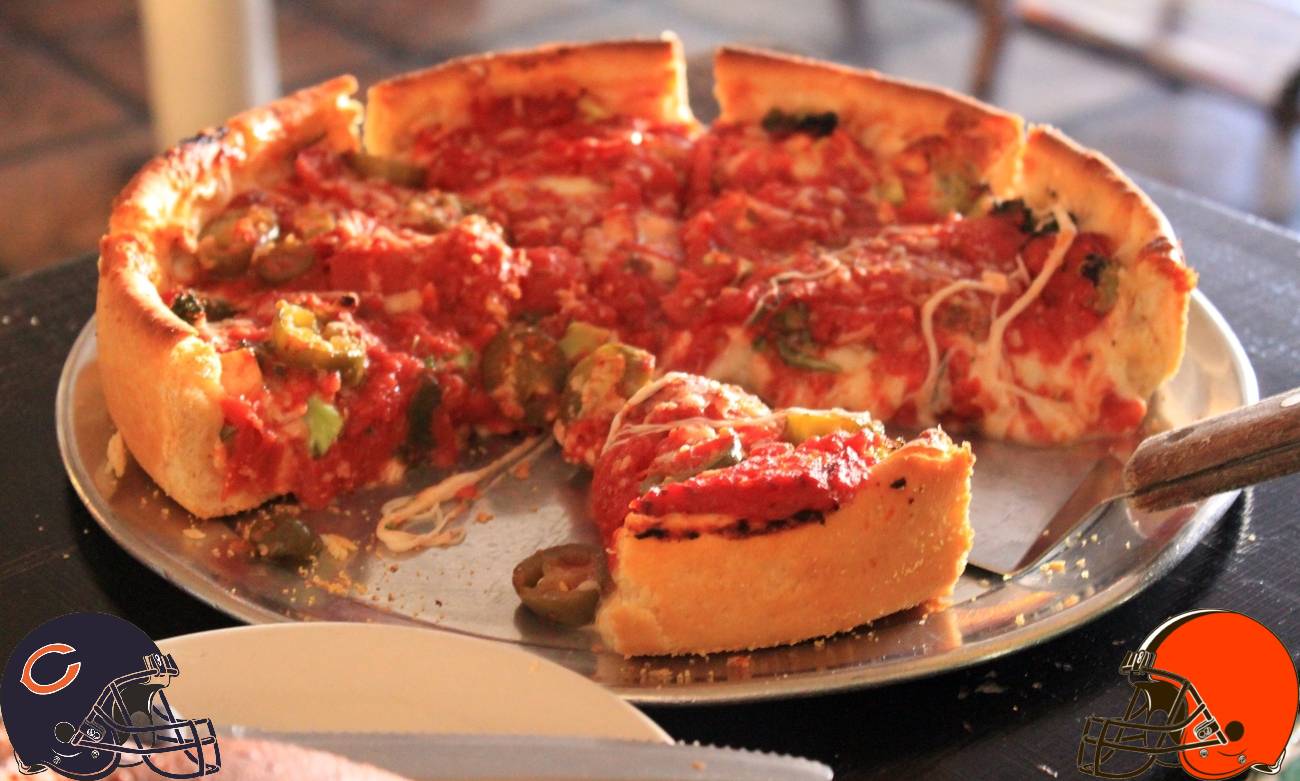 The Bears will want to flee back to Chicago for a slice of comforting deep dish after the Browns are through with them.

Another week of the RealBrownsFans.com mailbag. Lots of intrigue this week as the Bears come to town. Below we have RCF members Rafters, SuperSurge and AZ weighing in on the matchup. As always, feel free to contribute in the comments below or in the forums!

It’s official: Justin Fields will make his debut NFL start against the Browns Sunday. Would you have rather faced Fields or Dalton, and how do you expect Fields to fare?

Rafters: I’d rather face Justin Fields–because he’s more entertaining. If all you care about is the Browns winning, then you’d prefer Dalton. Fields’s legs should give the Bears offense another dimension to put pressure on opposing defenses, while his arm can actually hit Darnell Mooney downfield in areas where Dalton has struggled. Sure the rookie may have growing pains early on, but make no mistake about it–Justin Fields is the far superior player to Andy Dalton.

AZ: The Bears will ease him into the offensive system, likely setting him up for success with high efficiency looks off play action early. If he finds a rhythm, and uses his legs as a weapon against a Browns LB core that, outside of JOK, isn’t among the fastest in the league, they can set up some deep shots over top to Marquise Goodwin or Darnell Mooney.

Joe Woods will need to have the Browns defense in contain mode, which instantly makes Fields a bigger threat than Dalton.

Surge: I’d much rather face Dalton. Whether by scheme, execution, or both, the Browns have trouble with QB’s that can run or escape the pocket. I don’t expect anything crazy from Fields, but he’ll probably look to get rid of the ball quickly with a deep shot mixed in.

What do you expect from the Browns’ offense this week in the face of Jarvis Landry’s absence, Baker Mayfield’s shoulder injury, the roughed up offensive line, and Odell Beckham Jr.’s likely re-insertion to the lineup?

Rafters: I suspect that we’ll see Anthony Schwartz and Rashard Higgins stepping up in WR routes, but the running game and our tight ends will be our bread and butter. As excited I am to see Schwartz get behind Eddie Jackson for a deep score, I’m more excited to watch Chubb and Hunt grind Roquan Smith and that Bears D to dust.

AZ: I expect a bigger role for the Browns ancillary receivers, Rashard Higgins, Donavan Peoples-Jones and Demetric Felton. The real winner may wind up being Kareem Hunt, who could get more active as a weapon outside this week, or get designed touches in the screen game.

OBJ will almost certainly be on a pitch count, and I’d expect his number of targets ranges anywhere from 5-8 as they transition him back into the fold.

Plenty of play action looks and safe, comfortable throws on the move from Baker as they look to limit his hits and stay the hell away from wherever the hell Khalil Mack is.

Surge: I’m not worried about the offense. We still have the best RB room in the league, a great set of TE’s, and capable WR’s. The key will be the offensive line. The Bears have a strong defensive line so it will be up to Stefanski to scheme some ways to keep them off balance. I’d expect heavy doses of Chubb/Hunt early with our patented play-action off it. The hype is always high for OBJ, but my expectations for him this week are modest. I think catching 3-5 balls and coming out healthy would be a win in his comeback path. I’m going to call my shot with Donovan Peoples-Jones having a good game this week. He’s been on the field for 93 offensive plays and ran 50 routes, the most of any skill player on the team. It just hasn’t translated to catches… yet.

Are you concerned about the Browns’ defense?

Rafters: Am I confident that this group will perform up to what their talent on paper says they are capable of? No. Am I confident that they will underperform? No again. Right now I’m interested. I want to see our defense improve every game. I expect position groups to execute better and Joe Woods to call more effective plays as the year progresses. As long as I see progress, I’m content. If there isn’t any progress, then I will start to worry.

AZ: Not really, in spite of his speed, Fields is a rookie attempting to transition to the NFL. That comes with a number of hurdles, and Joe Woods will turn up how aggressive he can be in an effort to disrupt Fields and force him into tough decisions in the pocket.

I’m expecting a lot of negative plays and a few turnovers.

Surge: I have my concerns with the defense, but I’m not ready to panic. We have multiple new parts that need to find their rhythm. I’m willing to give it a few more weeks before I get worried.

Predict the outcome of Sunday’s game.

Surge: 31-20 Browns. Bears score in garbage time to make it seem closer than it really was.