The fates are changing the stars for both of these earth-toned franchises leading up to week 3. 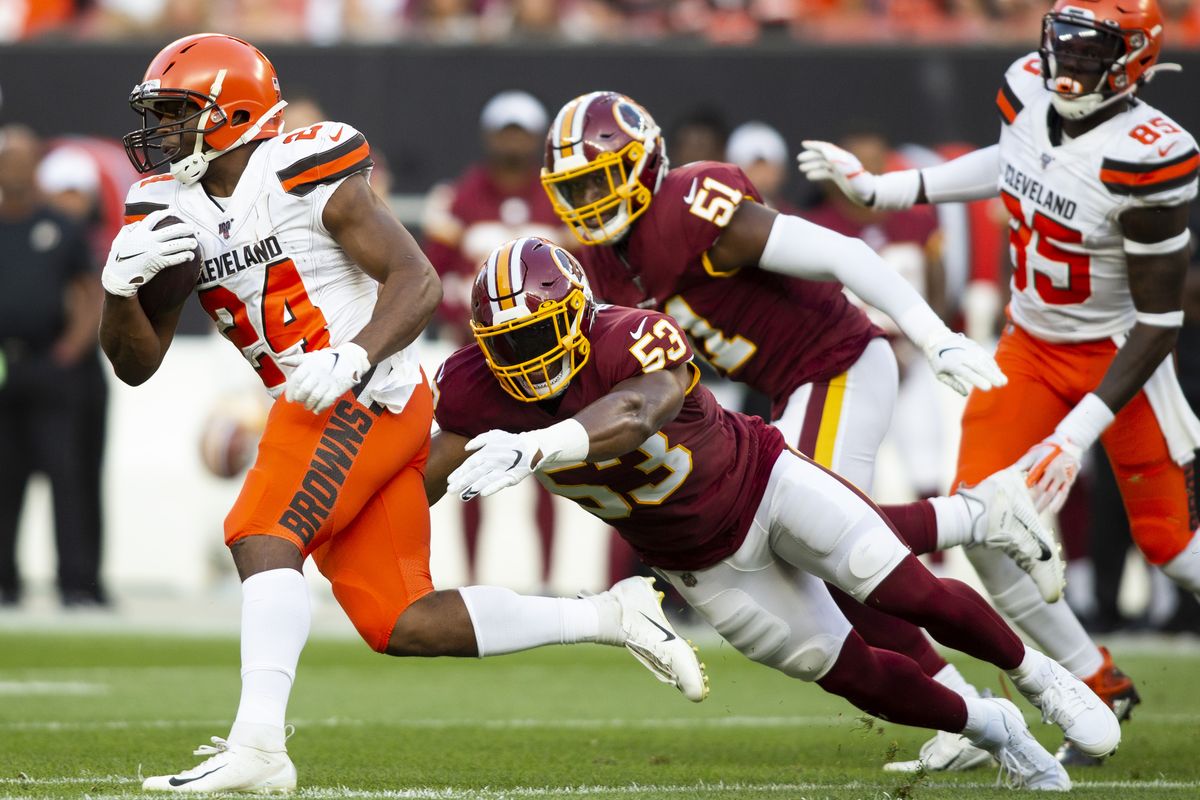 The fates are changing the stars for both of these earth-toned franchises leading up to a Week 3 matchup in Cleveland.

The Cleveland Browns come off their sound victory Thursday against the Bengals to host the “Washington Football Team established in 1932.” Washington lost a hard-fought week two showdown 30-15 to the Arizona Cardinals. The Browns are righting the ship after a sound beating in week one while their opponent is adjusting to bad news.

Where have I heard of this heading before, am I right? Let’s stick to football and begin with the team name. After owner Dan Snyder famously claimed the team would NEVER change its name, he caved to the outpouring of pressure from sponsors. They now have a lame name to go with an increasingly lame history.

They also changed head coaches, hiring Ron “Riverboat Gambler” Rivera. Additionally they have pushed all their chips into the middle of the table with the owner’s favorite young quarterback, former Buckeye Dwayne Haskins.

Rivera is a former run stuffing middle linebacker next to Mike Singletary for the 1980s Bears teams, who can boast a large coaching tree on the defensive side in the NFL. The Browns former defensive coordinator Steve Wilks brought this Cover 3 system with him last season, so Baker Mayfield should recognize a lot of pre-snap looks from the Redskins defenders.

The system is built around a strong four man rush from the linemen, and Washington already put that group in place. Against Arizona the defense only pressured Kyler Murray on 12 out of 46 dropbacks, but often positioned themselves to contain the dangerous running quarterback. Against the less mobile Mayfield, expect Rookie of the Year candidate Chase Young, second year end and Old Spice spokesperson Montez Sweat, and veteran Ryan Kerrigan to create pressure on the outside. Interior defensive tackles Jonathan Allen, Daron Payne, and Matt Ionnidis also have outstanding resumes and multiple deep playoff runs.

In the defensive back seven, Washington is young but rebuilding. Fabian Moreau and Jimmy Moreland provide some interesting depth behind the veteran starting cornerbacks Ronald Darby and Kendall Fuller. Moreland is about 175 pounds soaking wet but has great ball skills in the slot. Safety is a glaring weakness for the Browns to exploit as Landon Collins and Troy Apke are both off to terrible starts this season.

It is entirely possible that as a Browns fan, you have an affinity for former Ohio State Buckeyes. You may find yourself grinning knowingly as the strong right arm of Dwayne Haskins Jr. targets “Scary Terry” McLaurin for big gains. That really might be the only aspect of the Washington offense that brings a smile to anyone’s face. Rookie Antonio Gibson has a lot of talent but is making the conversion from wide receiver and gadget play extraordinaire to full time tailback. The Browns may be fortunate to face him early in the season as he is still trying to reach his potential.

Problems begin and end with possibly the worst offensive line in the NFL. After losing tackles Trent Williams and Ereck Flowers, PFF graded the left tackle Gernon Christian last in position grades and left guard Wes Martin 71st out of 72. Just as the team realized they are in for a long rebuild, the only plus offensive lineman and franchise player Brandon Scherff suffered a knee injury which should sideline the Pro Bowler for several weeks.

According to NEXT GEN STATS, Dwayne Haskins ranked dead last in the NFL in time to throw in the first two games. Washington’s line allowed 17 pressures on 36 dropbacks, tied for second-worst pass-blocking efficiency in the league. So Browns fans can expect designed quick throws. The Browns front four is definitely right up there with the Redskins in pass rush ability, so expect the game to be won or lost in the trenches.

Keys to the Game

Las Vegas betting lines believe the Browns will win this game by about a touchdown. As strong as the Washington Football Team might be at defensive line, they are farther away in the rebuild than the Browns everywhere else. This is a huge test for the Browns offensive line, who have looked so good under Washington’s former interim head coach Bill Callahan. Establishing the run against such a talented front four will put pressure on the mediocre linebackers and safeties. Baker Mayfield has a penchant for turnovers, with 50 turnovers in his 32 career starts. In the face of good pass rushers, Mayfield must again show that he has made progress understanding how to manipulate the pocket pressure.

Expect more this week as RealBrownsfans.com continues to analyze and project the direction of the franchise in 2020.